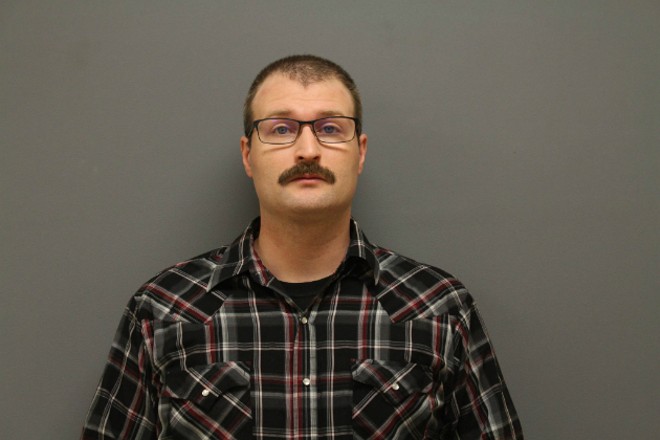 A thief with a self-proclaimed "underwear fetish" is in jail in Franklin County after a teenage girl heard him rummaging through her family's home, police say.

Cody Hassler, 34, is facing felony charges of stalking and burglary as well as misdemeanor stealing.

One of Hassler's neighbors in Washington, Missouri, called police on October 9 to report a burglary. The woman told investigators she was asleep when her daughter heard footsteps in the kitchen. An unidentified man then bolted out of the house through the basement, dropping a pair of underwear in the living room as he fled.

It's not clear how detectives eventually traced the surprise encounter to Hassler, but he confessed when questioned, police say.

"The male subject admitted that he had told himself that he 'went too far' that night and that he has an 'underwear fetish,'" police say in a statement.

Hassler had targeted his victims, previously spying on them through their bedroom windows on multiple occasions, police say.

On the night of the burglary, he slipped inside the house through an unlocked basement door and began gathering underwear from a laundry room before the teenage daughter heard him.

Washington is about 45 miles west of St. Louis.

Hassler was previously convicted of second-degree assault and leaving the scene of a motor vehicle accident after a drunken crash in 2010. His five-year sentence was suspended and he completed probation in 2014, according to court records.

He was jailed in the recent stalking and burglary case on $75,000 cash-only bond. Washington police ask anyone who thinks they might have been a victim of Hassler to call detectives at 636-390-1050.