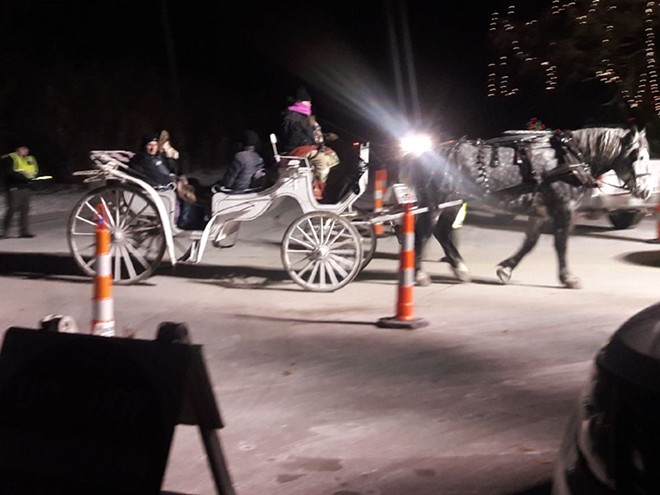 "Out of an abundance of caution for the safety of the horses and patrons, we have decided this is the best course of action," Stenger said in the release.

Although Thursday and Friday rides remain unchanged, forecasts for Saturday indicate another round of intense cold, and that day's rides have been cancelled. Customers who purchased carriage rides for Saturday are being directed to call Metrotix, at (314) 534-1111, to obtain a refund.

For the next several days, the weather outside is expected to stay bitingly frightful for man and beast alike. However, despite temperatures plunging into single digits, business continues as usual for the horses pulling carriages through the Winter Wonderland in Tilles Park.

Reached yesterday, a spokeswoman for St. Louis County confirmed that the rides, provided by St. Louis Carriage Company, are still being offered through December 30. "The carriage rides will continue," she said. "Unless there's treacherous, icy roads where they couldn't get to the park."

Dan Kolde, an attorney and animal rights activist who long fought the use of horse carriages around St. Louis, filed a lawsuit this morning seeking to bar the carriages from operating. To Kolde, keeping the horses working in freezing temperatures is nothing short of animal cruelty.

"It is cruel and unconscionable to have those horses out there," he says. "This is nothing but greed."

Kolde provided RFT with the photo above, which he says was snapped last night in Tilles Park when the temperature was a frigid 9 degrees Fahrenheit.

In St. Louis city, where the Department of Health regulates the physical well-being of carriage-pulling horses, the animals are prevented from working when the temperature drops below 15 degrees or the wind chill hits zero. But the county appears not to be enforcing any such restrictions.

Filing on behalf of the St. Louis Animal Rights Team, known as START, Kolde is seeking a temporary restraining order against St. Louis County and its Parks and Recreation Department. The suit asks the judge to order the county to stop the carriages from operating when it gets too cold — using regulations laid out in the Metropolitan Taxi Commission, or MTC, "Vehicle for Hire" code.

It's worth nothing, however, that the regulatory framework around horse carriages is currently tied up in messy litigation. As RFT revealed over the summer, the MTC quietly stopped enforcing regulations on horse carriages in the wake of a lawsuit brought by horse carriage company Brookdale Farms, which contends that state law gives the commission no power over horse carriages. A previous agreement between the MTC and St. Louis city resulted in the city health department taking over the duties related to the horses' physical health, but it's not clear who fulfills those duties in St. Louis County.

The lawsuit filed today doesn't take specific aim at the taxi commission. Rather, it argues that a St. Louis County ordinance obligates the government to follow the Vehicle for Hire codes.

A message left with St. Louis Carriage Company was not returned late in the day on Wednesday. Current forecasts show a low tonight of 17 degrees in St. Louis, with wind chill at 3 degrees.