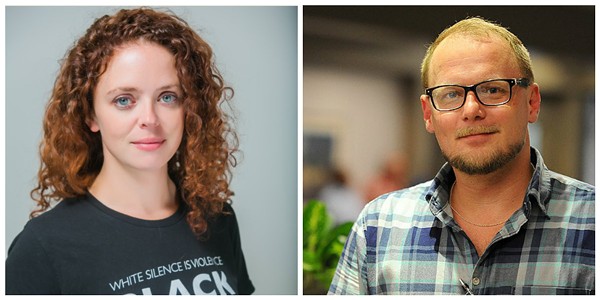 On Tuesday, St. Louis' Democratic Central Committee endorsed one of its members, Paul Fehler, to serve as the party's nominee for the aldermanic seat vacated by Stephen Conway.

Committeewoman Annie Rice also sought the nomination, and said at the meeting that she wouldn't run as an independent if the committee picked Fehler. But today Rice reversed course, criticizing the committee's unwillingness to listen residents at the meeting as "undemocratic."

In addition to dozens of people who'd come to speak on Rice's behalf, Rice said she'd presented a list of 560 signatures from 8th ward residents — which she notes is a full two-thirds of what the winner got in the last Democratic primary.

"Such strong support from the Ward in such a short amount of time clearly indicated where the people of the 8th stood prior to the nomination," she said in a press release this morning.

Yet the committee, which includes two members for each ward in the city, cut off debate. That angered many 8th ward residents, who have been vocal in recent days on social media criticizing the decision.

Rice said that the decision also caused her to change her mind. "Instead of taking my neighbors’ voices seriously, multiple committee members described bringing these voices to their consideration as 'disrespectful' to the committee and 'meaningless,'" she wrote. "I firmly believed the committee would see the support I have in the Ward and choose the candidate with the most support of my neighbors. Instead, they chose to disrespect the input of voters in the 8th ward, making these voters feel truly disenfranchised."

The 8th ward, which includes a large portion of Shaw as well as parts of Tower Grove East and Southwest Garden, is one of the city's more progressive areas. Just 44 percent of its voters said "yes" to a sales tax increase to give police a pay raise, a measure widely seen as a referendum on the department following months of protest. Conway, an old-school Democrat recently appointed city assessor, had seemed out of step with the ward's increasingly progressive bent.

Rice and Fehler, who were both elected to their seats on the central committee as part of a wave of progressives challenging the old guard, both have bona fides more likely to appeal to the ward's current composition. A data analyst active with the For the Sake of All public health project, Fehler produced the 2011 documentary The Pruitt-Igoe Myth; he also canvassed for Bernie Sanders. Rice, an immigration attorney, has been a familiar face at the protests and won the endorsement of Mobilize Missouri before Tuesday's central committee vote. While Fehler supported the Prop P sales tax increase for police, Rice opposed it.

The special election to fill Conway's seat is set for February 13, 2018. Rice will need to collect 325 valid signatures by January 12 to make the ballot.