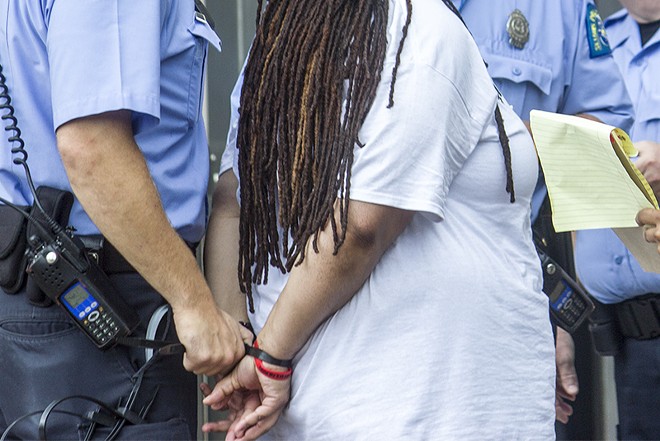 In 2013, the final year before St. Louis attempted to decriminalize marijuana, the St. Louis Metropolitan Police Department made 1,056 arrests solely for pot possession — with black suspects accounting for 87 percent of those arrested.

But in the four years since the city made big changes to the way it handles marijuana possession cases, police records show that black suspects have continued to comprise roughly the same percentage of violations: a total of about 85 percent from 2014 to October of 2017.

That statistic, first obtained by the Riverfront Times through a Sunshine law request, was startling to civil rights attorneys. Sara Baker, the legislative and policy director for the ACLU of Missouri, remarks that the new data stands as “a reconfirmation of an old problem.”

Proponents of reforming the city’s drug laws had cheered the policy change that was implemented in 2014, following the passage of a bill that enjoyed broad approval by the city's Board of Aldermen. Prior to the bill’s passage, officers sent all drug cases, even for small quantities of weed, to the Circuit Attorney’s Office for state-level misdemeanor and felony charges, which can carry significant fines and jail time.

Then came the decriminalization proposal sponsored by Alderman Shane Cohn. Starting in 2014, officers were instructed to treat those suspected of possessing less than 35 grams of marijuana similar to someone committing a traffic offense, with fines between $100 and $500.

But the racial dynamics of who was being cited, records now show, have stayed stubbornly the same. Officers may have changed the paperwork form on which they wrote the charges, but not the racial makeup of the people they cited.

“What’s incredibly revealing about the data,” says the ACLU’s Baker, “is that time and time again, when we see reforms either at the state or local level, and particularly reforms that still allow for fees or for low level criminalization, we might see a dip in is the amount of people overall that are arrested and charged. But that disparity rate remains shockingly persistent.”

Operating under the new policy in 2014 for the first time, pot possession arrests in St. Louis dipped by 144 from the previous year. But that modest decrease still showed virtually the same racial breakdown seen in prior years.

In 2014, officers recorded 294 arrests for violations of the city’s updated municipal code; 85 percent of those people arrested were black. African Americans also accounted for 87 percent of the 618 arrests made on state charges, which are now reserved for suspects with more than 35 grams or those with at least two prior possession arrests in the city.

The pattern continued in 2015: 88 percent of those busted for ordinance violations were black, as were 87 percent of 649 people facing state charges.

That breakdown is nothing new: According to a 2013 report by the ACLU, which pulled data from the FBI’s Uniform Crime Reports, African Americans were eighteen times more likely to be arrested for marijuana possession than whites in St. Louis city. That disparity neither conforms to the city’s racial demographics — about 50 percent of the city’s population is African American — or to the rate of marijuana use, which studies have repeatedly shown to be about the same for blacks and whites.

The persistence of the racial gap in arrests continues to worry Baker and the ACLU of Missouri. However, Rick Rosenfeld, a criminologist at the University of Missouri-St. Louis whose work focuses on crime statistics, says it's not necessarily a sign of racial bias among cops. Instead, he suggests, it may reflect the way blacks are more likely to live in neighborhoods plagued by violent crime.

"[Officers] stop blacks on the street, typically young black men, out of a concern of violent crime," he explains. "They find no evidence that that individual was involved in violence crime, but they do find marijuana on the individual. And they arrest him."

"That seems to be the pattern. That's not the only reason. It's possible there’s racial bias involved in some of these arrests.” Racial bias could be just one element in the stew, Rosenfeld notes. Officers in neighborhoods suffering violent crime tend to be proactive and on the lookout to stop violence before it happens. They make judgment calls based on experience and (hopefully) reasonable suspicion. Sometimes those judgment calls need a convenient “pretexual arrest,” like a traffic stop or marijuana possession.

“Because of focus of our violent crime, they’re stopping people they suspect might be involved in violence," he says. "They don’t have sufficient evidence for an arrest for violence, they find marijuana on the individual and they take him off the street for a time for that reason. They make an arrest on the drug charge. "

That would change if an ambitious plan to further decriminalize marijuana gets Aldermanic approval. The bill, sponsored by Alderwoman Megan Green, would outright abolish penalties for pot possession by prohibiting the police department from expending “any resources on the civil or criminal punishment” for the use or possession of two ounces of marijuana, or the growing of ten plants.

A counterproposal by Board of Aldermen President Lewis Reed would simply lower the fine for pot possession to $25.

In the opinion of the ACLU of Missouri, Green’s bill is on the right track.

“I think the focus on deprioritizing enforcement is incredibly important for the city,” says Baker, who has provided written testimony in support Green’s bill, BB 180.

“When you have the continued use of fines,” she continues, “we’re worried that it’s still going to plague the city with the same selective enforcement that we’ve seen with marijuana laws. If we continue to spend a significant amount of money and resources on low-level possession, we’re not getting at the roots of what needs to change in St. Louis.”

Attorneys warn that merely lowering the fines, as Reed’s bill proposes, won't solve the problems of racial bias baked into the results of St. Louis’ decriminalized drug enforcement policies. And getting a citation, they say, has very real consequences. Defense attorney Andrea Story Rogers warns that people believe pot possession in St. Louis is handled “just like a traffic ticket,” but that's far from the case.

“They pay the fine because it's so cheap," Rogers says. But what they don't realize is that they’ve effectively pleaded guilty to a drug crime. “People think this is nothing, but if you plead guilty to it, even in a municipal court, it would show up in a criminal background check. It doesn't matter how low the fine is.”

And for those who can’t pay the fine? Blake Strode, the incoming executive director of ArchCity Defenders, argues that even “decriminalized” violations pose a serious danger to clients who are homeless or indigent.

“It would be a mistake to assume that because these are treated like ‘traffic tickets’ that they don’t result in actual arrests,” he says.

For years, ArchCity Defenders has tried to help people who rack up court debt and miss court dates for municipal violations just like St. Louis' decriminalized pot citations. For many people, even infractions on the level of a traffic ticket can eventually lead to a warrant out of their arrest, which can land them in the City Workhouse for months because they can’t afford to pay bail.

“The proliferation of debtor’s prisons in the region arises not from state level charges but from municipal ordinance violations,” Strode notes. These seemingly minor cases act as entryways into the criminal justice system, with all its attendant complications, fines and dangers. And for poor people of color, those dangers are magnified by patterns of policing that produce results that smack of racial bias.

That’s why Strode doesn’t see either marijuana bill, Green’s or Reed’s, as a sufficient solution on its own.

“We should understand that the decriminalization bills that are under consideration now do nothing about the disparate policing that leads to the 85 percent of marijuana arrests being made against black people,” he says.

“What we should be deeply concerned by is that the people who were brought into that system in the first place were targeted by racially biased policing. It’s just clear in these numbers. And that’s really a problem of who is being policed, how they’re being policed, and the discretionary calls that are being made by police on a daily basis.”

Click through for the full data table used in this story.

Editor's note: The text of the story has been updated to correct the arrest statistics from 2015.