Missouri Representative Bruce Franks Jr. (D-St. Louis) and the family of Cary Ball Jr. are demanding that prosecutors reopen the case into an officer-involved shooting that took place more than four years ago.

The family held a press conference today at the 5th Missionary Baptist Church, seeking to bring new attention to Ball's death, which took place at the hands of St. Louis Metropolitan Police officers on April 24, 2013. They're hoping to pressure both the Circuit Attorney's Office and the U.S. Attorney's Office to take a new look at the case.

Ball was shot and killed by officers Jason Chambers and Timothy Boyce after a short pursuit that ended in a wreck. Ball was shot 25 times after the officers said he pointed a handgun at them.

Ball’s mother Toni Taylor, his brother Carlos Ball and father Cary Ball, Sr. all spoke after being introduced by Franks. 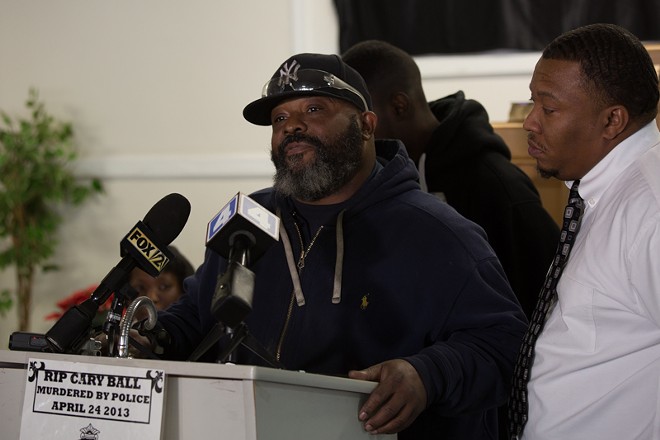 Franks then spoke about Ball being an honors student at Forest Park Community College who was pursuing a career as a social worker. (He'd done six years on and off behind bars before being released in May 2012; family members say he was turning his life around.) He then described a force analysis report done by William Harmening, an adjunct professor at Washington University.

Harmening faulted police for a substandard investigation, the Circuit Attorney for failing to present evidence to a grand jury, and the FBI for not doing an independent investigation using the witness statements, forensic evidence and police statements.

As Harmening's report indicated, several agencies did take a look at the shooting at the time, but all declined to press charges. After an internal investigation found that the officers were justified in using deadly force, former St. Louis Police Chief Sam Dotson asked for an FBI investigation. It came to the same conclusion, and the U.S. attorney for the Eastern District of Missouri, then Richard G. Callahan, agreed with the findings.

Now the family is asking that Circuit Attorney Kim Gardner, who took office earlier this year, reopen the case.

Franks also called for the new U.S. attorney, Jeffrey Jensen, to conduct an independent, parallel investigation. “When this happened to Cary Ball, Jr. there wasn’t this process put in place that we have now," Franks says. "We didn’t have the Force Investigative Unit and all things weren’t to be turned over to our Circuit Attorney. That’s why we are demanding that they turn it over now.”