Lawrence O'Toole, Now a Finalist for Police Chief, Is Silenced at Public Forum 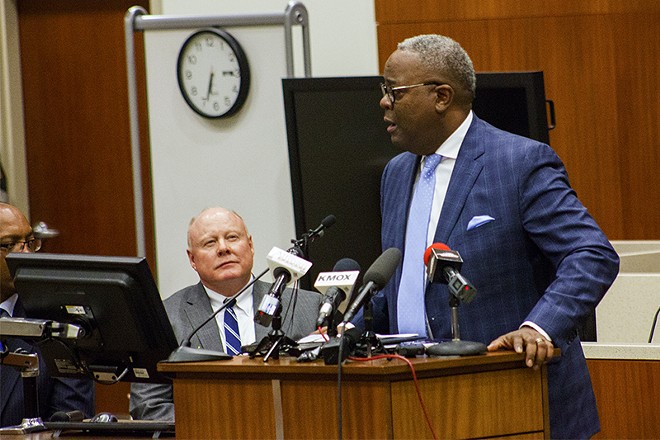 "Fire O'Toole." That was the protesters' demand — regularly chanted on the streets during demonstrations after the Stockley verdict, drawn in chalk outside the police headquarters and even drowning out St. Louis Mayor Lyda Krewson at her own town hall. But last night, during a public forum unveiling the six finalists competing to be St. Louis' next police chief, it finally caught up to Interim Chief Lawrence O'Toole himself.

Activists caustically — and at times, musically — opposed the interim police chief's presence among the candidates, with enough force to disrupt the event every time O'Toole tried to answer a question.

"The only candidate that is not being allowed to speak is the candidate that we the people asked for the city to terminate," activist Elizabeth Vega announced during one of the disruptions.

"We will stop trolling the chief," Vega continued, to the loudest applause of the night, "when he does the right thing and excuses himself as a candidate of this process."

O'Toole attempted to push through. He seemed to be reciting from a prepared speech, and the interruptions clearly didn't help his flow. Even with the aid of a microphone, he struggled to be heard. (It didn't help that audio feedback screeched and whined throughout the two-hour forum.)

And yet, although Vega and others shouted-down O'Toole's introductory statements, they granted him around three minutes to make an uninterrupted response to the forum's first question posed to the candidates: "Given the broken community relationship between the community and police, what are your plans to rebuild this bridge and start to heal the divide?"

O'Toole's response stood out from the other candidates, all of whom restated similar beliefs in the principles of accountability and "buck stops here" leadership philosophy.

The interim chief, in fact, came the closest to making concrete promises.

"Relationships are about trust —" his answer began, eliciting a bout of exaggerated laughter from the protesters. He pushed on. "And giving people a voice. And being heard. That's what I'm going to do." O'Toole vowed that he would increase transparency through the department's website, publishing orders and policies, as well as "all our reports regarding discipline." He then segued to his support for increased foot-patrol beats.

"Community policing is a key to my strategy," he said. "Getting out there, knowing good people and getting their cooperation. We need to earn their trust."

O'Toole's response was then punctured with heckling, and some audience members eventually snapped back at the protesters, demanding that they respect the forum and its speakers. The heckling only grew louder.

"Can I chime in?" The query came from Mary Edwards-Fears, a captain with the St. Louis Metropolitan Police Department and the only female finalist.

"I'm gong to ask that you be respectful as well," she told the protesters. "This is my acting chief, he has been my commissioner, he has been my lieutenant colonel, he has been my friend and my mentor. Now, if you're not going to respect him, then I can't stay, and I can't participate."

The protesters didn't miss a beat. "Fine!" one shouted. "Bye!"

The six candidates have been heavily vetted in a process that took months. Announced publicly for the first time last night, they had only a short time to make an impression. Public Safety Commissioner Jimmie Edwards has said he will choose one person to be chief within weeks.

With six candidates needing time to speak, the forum's two-hour time limit only allowed each to get through an introduction and four questions, and while there was plenty of abstract discussion about leadership and accountability, the candidates rarely dipped into specifics.

Regardless, thanks to the protesters, an event that had been pitched as a sort of public job interview turned into a referendum on the department's actions this year under O'Toole's leadership: In the wake of protests, the department was sued by the ACLU for its use of mass arrests and mace to "punish protesters." Reporters and uninvolved bystanders — including a Navy officer and an undercover black cop — were arrested in kettling traps. A metro officer known as the "Riot King" led squads of heavily armored cops firing pepper balls and tear gas along residential streets. A federal judge ruled for the ACLU and against the department, issuing new restrictions on how the department can respond to demonstrations.

That is O'Toole police department, protesters allege. And they've seen enough of it.

The background lent dramatic contrast to the five other candidates' talk of trust and bridge-building; in that context, even platitudes sometimes sounded like jabs at O'Toole. Indeed, these were career law enforcement officials who were explicitly telling a crowd that they would fix what was ailing in the city's department — ailments presided over by O'Toole since the surprise April resignation of Sam Dotson.

Keith Humphrey, the current chief of Norman, Oklahoma, seemed to channel that contrast to the greatest effect.

Humphrey received one of the few applause breaks of the night. It wasn't an ovation. No one cheered. But when a new voice spoke, even the department's harshest critics were willing to listen. That might be the best any of the candidates can hope for.