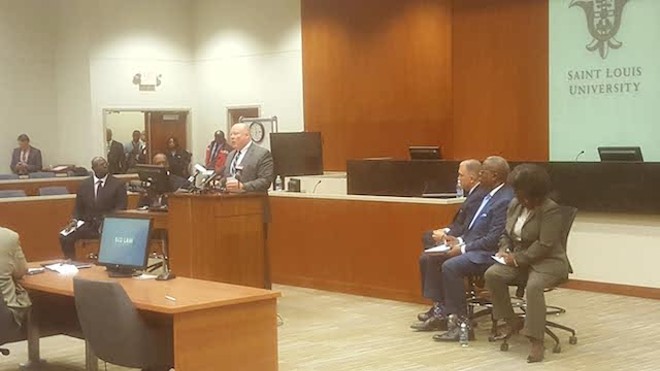 Odds are good St. Louis' new police chief will have familiarity with the city and its department — three of the six finalists are currently employed by it.

After a national search, the city tonight unveiled its six finalists at a community forum. They include:
O'Toole took over just after Mayor Lyda Krewson's inauguration this spring and has become a lightning rod for activists.

Hayden was also involved with the department's response to the protests; though he lacks O'Toole's baggage, he was one of the majors on protest duty and was riding with "Riot King" Brian Rossomanno on the night he was kettled. Previously a member of the internal affairs division, he helped investigate the World Series ticket scandal.

The other finalists include three veterans from other departments:
The RFT's Danny Wicentowski is at tonight's forum; check back for coverage on all the finalists and what they had to say tomorrow.

Doyle Murphy contributed to this story.