Alderwoman Megan Green to Take on Lewis Reed for Board Presidency 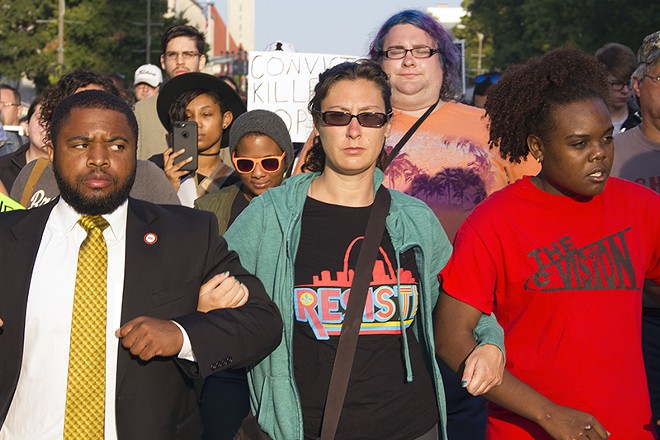 Megan Green, the alderwoman for the 15th Ward, is coming for Lewis Reed's job: She's going to be throwing her hat into the ring for president of the Board of Aldermen.

The electoral matchup isn't slated until March 5, 2019 (!!), which means that there's plenty of time for the two candidates to hash out policy positions, build campaigns and, oh yeah, dig their respective knives into each other, prolonging a feud that already spans the personal, professional and political.

First elected president of the Board of Aldermen in 2007 after eight years as alderman, Reed has since run for mayor twice — losing both times — while maintaining his status as the head of the city's legislative body. As president, Reed assigns which bills go to which committees and who sits on those committees, determining both other members' clout and the pace of legislation. It's a critical role for a city whose mayoral power is sharply limited. Reed also makes up one-third of the powerful board of Estimate and Apportionment.

Reed's tenure has not been without controversy. He used his position on the Estimate and Apportionment board to push through an unvetted pilot for body cameras — earning a stern pushback from Comptroller Darlene Green for his tendency to grandstand. And before that, his sponsorship of the controversial bill to give the Blues $64 million for stadium renovation was marked by notable flip-flops and a hefty contribution from a minority owner of the team just one week before the vote.

But it was a previous stadium issue — one involving the team formerly known as the St. Louis Rams — that set relations between Reed and Green into dumpster fire territory. At the time, the board's Ways and Means committee had just endorsed a plan to fund $150 million of a proposed $1 billion football stadium, and Green alleged via Twitter, "I’ve had loved ones offered bribes for my support" on the stadium deal. She later called it "legalized bribery" and claimed that fellow Alderman Sam Moore had reported being approached with bribes in exchange for his stadium vote.

Nothing came of Green's allegations, but Reed didn't let the suggestion that the board was crooked go quietly.

"She clearly has lied about this," Reed told the St. Louis Post-Dispatch at the time. "Something needs to happen. The board, universally, is really upset about it."

Green was never officially reprimanded, though it's worth noting that, after initiating an investigation, then-St. Louis Police Chief Sam Dotson told Reed "there was no substance to [Green's] allegations." Green later apologized to the board for her claims about Moore.

Barely two months later, in February 2016, Reed appeared on the radio show hosted by outspoken totally-not-a-racist Bob Romanik, who proceeded to trash Green on-air as a "skanky bitch," an "alderbitch" and a "skanky-ass bitch" as Reed chuckled along. Reed would later publicly apologize for not speaking up.

Got all that? Because if the recent past is any indication, these grudges will factor into the coming race — and the next year of business at the Board of Aldermen. The relationship between the two city lawmakers hasn't healed, and as recently as last week, their sparring turned decidedly toxic during a committee hearing over competing marijuana legalization bills.

Green has earned some sniping from colleagues who see her as a show-off more interested in playing to her progressive base than getting things done. But she may be as beloved in her ward as she is considered suspect at City Hall. She handily won her reelection battle this spring over an established name, former Alderwoman Jennifer Florida. Still, she'll likely have a bigger challenge winning city-wide in an electorate that not only elected Mayor Lyda Krewson but also said yes to a raise for police.

In remarks to RFT earlier this afternoon, Green maintained that her motivation for seeking office is real change at City Hall.

"The board lacks a legislative agenda right now," she said. "The petty politics, the backroom deals, that's what's been dominating the board. We have to have somebody in that position who hasn't been playing the insider game and who hasn't been afraid to stand up to the status quo. That needs to the be the role of the president, to set that standard, and I'm looking to bring that to the position."

For his part, Reed said in an email that Green's challenge is "no surprise." His email reads, in full:

"I find it a bit hypocritical that someone whose legislative record has consisted mostly of tax abatement deals for developers, who has recently been reported to the Circuit Attorney’s office for violating state law by making a side deal with a developer, and who has voted in favor of mass eminent domain of a north St. Louis neighborhood is running on the platform that she has chosen. Introducing legislation that is illegal and will never hold up in court is not bold, it’s a waste of time and tax dollars. I'm looking forward to a successful re-election and taking my message of creating a Stronger, Safer and more unified St Louis to the voters. Until then, I’ll continue working with people who are more interested in the progress of our city than in masquerades of self-promotion for personal political gain."