STLCC Students Who Protested at Meeting Summoned to Dean's Office

Sean Thomas is a St. Louis Community College success story. The Alaska native briefly took college courses after high school, but, he says, "I just didn't have any direction." He ended up bartending and working in restaurants in St. Louis instead of earning a degree.

Two years ago, he decided to give a college another try and enrolled at STLCC's Meramec campus, balancing classes with his job as a restaurant manager. At 36, he's now a member of Phi Beta Kappa and an honor roll student just one required course from his associate's degree.

In order to get it, though, Thomas will have to pass one big hurdle: a meeting with a dean to discuss an allegation of "misconduct."

As Thomas acknowledges, he was one of the students who participated in the rowdy November 30 meeting of the college's board of trustees. As the board prepared to vote on cost-cutting recommendations that could slash up to 95 jobs, five students lay down on the floor and linked arms. Others chanted loudly, disrupting the meeting for a full hour.

Thomas was one of the chanters. And in a letter dated December 7, Kim Fitzgerald, the college's dean of student development and enrollment services, suggested that might be a problem.

"Complaints have been made against you under St. Louis Community College policies pertaining to student misconduct," Fitzgerald writes, deploying the passive voice to frame the situation. "The complaints stem from allegations that you engaged in disruptive behavior at the Board of Trustees meeting ..." She then names the behavior as "shouting and chanting."

At least four other student protesters say they received similar missives by email yesterday. In them, Fitzgerald demands they schedule a time to meet with her before December 20. "Failure to do so may impact your enrollment for future semesters at SLTCC." Students who got the letters include some who lay on the floor and some who merely chanted.

A spokeswoman for the college did not respond to a message seeking comment yesterday afternoon. (See update below.)

The "disruptive" students are now weighing their options — but they feel disconcerted by the administration's less-than-friendly overture, one week after the meeting ended with Chancellor Jeffrey Pittman getting his way even after their protest.

Notes Thomas, "No one ever asked us to stop, to leave, or anything. We never had a conversation with law enforcement or any administrator."

Adds Michael Marino, who was one of the students who lay on the floor, "We knew there were risks involved. It was an act of disobedience, and we knew there might be consequences." 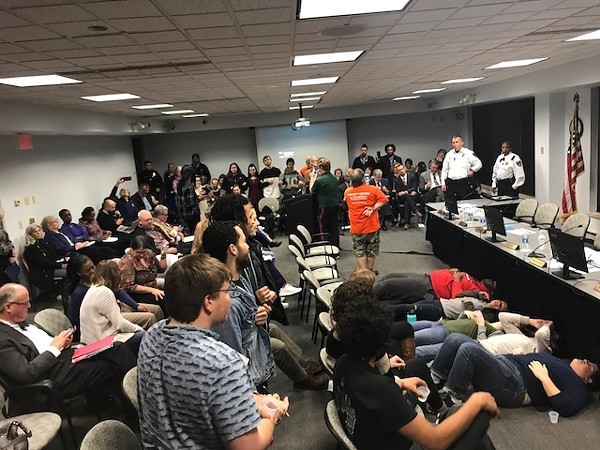 But the students felt they had no choice: "We put considerable time into making proposals that would involve not firing 75 people." They wanted to bring their ideas to the full board, Marino says, "but we were denied that by Chancellor Pittman."

Amna Habib says the students chose their form of protest with care. They saw what happened to math instructor Steve Taylor, who stood up to protest meeting policies a month before — and ended up body-slammed by a police officer. The college claimed that he'd "charged" the table where Pittman and the trustees were sitting.

"By lying down, or our goal was to show we are not threatening at all," Habib says. "There was no way they could say we were resisting them or being threatening." "Disruptive," however, appears to be another story.

The students have great things to say about their STLCC experience. Thomas, for one, credits a professor in an intro course for launching him on his current path — one that he now hopes will eventually earn him a PhD. Even so, he's leery of naming the course or even the subject matter because he fears getting the professor simply by praising him in this fraught climate.

He says the great instructors he's learned from are what's driven his resistance. "These are the people whose jobs they're threatening right now," he says.

Update: We heard back from a spokeswoman for the college around 10:15 a.m. She writes, "The purpose of the letter was to invite students to meet with their campus dean of students to discuss board policy and procedure as it pertains to conduct at St. Louis Community College Board of Trustee meetings. The letter does not impact their academic record and does not impede their enrollment at STLCC."