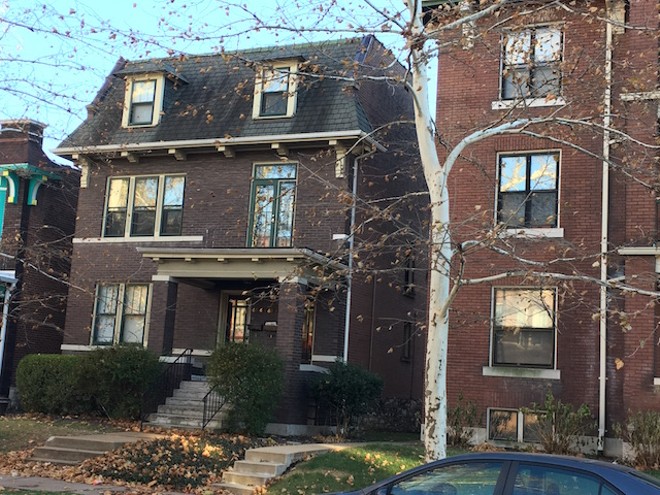 For more than six years, Afsaneh Razani has owned a rental property in the neighborhood just east of Washington University. With a two-bedroom unit downstairs and a five-bedroom unit upstairs, her Skinker-DeBaliviere duplex is perfect for students.

Make that seemed perfect for students. Razani got a letter from a St. Louis building inspector earlier this month informing her she was in violation of city ordinances. The problem? She was renting to three or more unrelated people.

Razani plans to appeal her citation — because her home has two units, she's convinced she is not in violation. She has three tenants in the upstairs unit and two downstairs; since the law suggests that each unit can hold up to three, the people she's consulted think she's OK, even by the letter of the law.

But she's unsettled by the bigger picture. It's not just that her appeal requires a $150 fee — "I have to pay to prove my innocence," she says with a bitter laugh. It's also that, as she acknowledges, she has rented the upstairs unit to more than three people in the past — with five bedrooms, that only makes sense. Limiting herself to three tenants going forward will hurt her bottom line.

And beyond that, she found herself wondering why she's being targeted. She's confirmed with police that the property has zero nuisance complaints; how did her tenants get on anyone's radar?

As it turns out, it's nothing personal — literally. Razani has instead gotten swept up in a little-noticed effort to root out landlords violating the rules in Skinker-DeBaliviere, a campaign led by the neighborhood association. In the past year, the executive director of the Skinker DeBaliviere Community Council, Brandon Sterling, estimates that as many as twenty landlords have been identified and cited — with efforts only gaining steam in recent months.

That campaign, as Sterling reluctantly acknowledges, has involved the cooperation of Wash U. But Sterling stresses that most cases have not involved the university; members of the association's Zoning & Occupancy committee have also identified houses with too many tenants by purchasing direct mailing lists and, even more simply, introducing themselves to new residents — and then asking friendly-sounding questions.

"Most of the information we're getting is from the neighbors," he says, "and they're funneling that back to a committee member." Then, after doing its research, the association gives the information to the city.

And while the city doesn't proactively look for violators, Building Commissioner Frank Oswald confirms that it is taking action on complaints. "What the city does is enforce the regulations when we're told it's going on," he says. And the neighborhood association has proven a reliable source. "In most cases, they've been right — and we've been acting on them."

As for the motivation behind the association's initiative, Sterling acknowledges no Neighbors-style frat boy antics are in evidence. (This is, after all, Washington University; even the undergrads are smart.) And while parking is definitely a problem in the neighborhood's narrow streets, he says it's ultimately about bigger concerns.

As for any students being dispossessed as as a result of those efforts, Sterling says, "We believe the renters are the victims in this situation. Ninety-nine percent of the time, they have no idea what's happening."

A spokeswoman for Wash U echoed that in a statement to the RFT.

"Washington University is supportive of efforts by the City of St. Louis and the Skinker DeBaliviere neighborhood to enforce occupancy limits in rental properties. The safety of students, and all who choose to live in rental housing, is a top priority. The city’s occupancy code provides important safeguards against overcrowding," the statement said.

Addressing the RFT's question about what happens to any students forced out of their housing as a result of the crackdown, the statement continued, "Students who need help locating suitable housing can contact Washington University’s off-campus housing office."

As for Razani, she finds the entire situation frustrating. The one exception in St. Louis to the three-person limit, a boarding house permit, requires sign-off from 51 percent of neighbors — the same neighbors now trying to root out landlords exceeding occupancy totals. She's not sure if she has any good options.

"I always try to rent one person per bedroom, and now they're saying, 'No, you can't do that?' This is the source of my income," she says. "And I want to ask them, 'Why can't I rent to five kids who want to be there?' This is my house."