A political fundraiser with ties to some of the Metro's most powerful Democrats was charged today with multiple felonies, accused of shouting racial slurs and firing a handgun out of the window of his Mercedes on Tuesday.

Mathew Lieberman, 38, was jailed on a $250,000 cash bond following his arrest. The veteran party operative has raised money in the past for St. Louis County Executive Steve Stenger and former city Mayor Francis Slay.

On Tuesday, he was cruising around the southwest edge of the city, terrorizing people, according to court documents. A worker at the Amoco gas station near Skinker Boulevard and Interstate 64 called police to report a terrifying confrontation. He told investigators Lieberman, a regular customer, bought a pack a cigarettes and then gave him what police described as an "offensive hand gesture."

The clerk walked out of the kiosk to question Lieberman, who pulled out a handgun, pointed it at him and called him an n——r, according to the account. The clerk scrambled behind the kiosk door and heard two shots. Lieberman, who was back behind the wheel of the Mercedes, pulled around and fired twice more into the kiosk before he took off, police say.

Investigators later learned of a second incident from the same day. Maintenance workers at the Jack in the Box at 1242 Hampton Avenue told police a middle-aged white man in a brown Mercedes was irate, shouting racial slurs and firing a handgun multiple times.

Police say they have identified the man as Lieberman. He was charged with two counts each of unlawful use of a weapon and armed criminal action.

"The defendant's conduct and use of epitaphs indicate his actions to be motivated by race," police wrote in the court papers.

The arrest was first reported by the St. Louis Post-Dispatch.

According to his LinkedIn account, Lieberman operates a pair of political fundraising and consulting business: RAL Strategic Investment Group and Majority Strategies.

He's worked for a number of big-name politicos. In September, he helped organize a ritzy dinner for Stenger donors at Cafe Napoli in Clayton, an event with minimum donations ranging from $100 to $2,500, according a flier obtained by the Riverfront Times.

At the time, there were already reports circulating that Lieberman had become a loose cannon, prone to solving disputes with a pistol.

In fact, activists believe Lieberman pulled a gun in response to protesters during a frightening exchange on September 16.

The incident is eerily similar to the episodes reported on Tuesday, although it did not result in shots fired. Thousands of activists were marching from the Delmar Loop following the acquittal of former police officer Jason Stockley on murder charges the day before.

But around 7:30 p.m., in the midst of a peaceful demonstration, a Mercedes sedan rolled into the middle of the crowd, witnesses say. Liz Gerard, who joined the march that evening, says she heard someone shout, "He's got a gun!"

Gerard, 25, says she did not see a gun, but she and others hurried away from the car.

"The main emotion was just kind of panic and fear," Gerard tells the Riverfront Times.

A video she took of the incident is dark, but it shows people near the car, including state Rep. Bruce Franks (D-St. Louis), ushering others away as someone shouts about a gun.

Gerard was able to photograph the license plate before the driver pulled away. The plate number — 0028 — matches the one listed for Lieberman in the police reports from Tuesday's incidents. 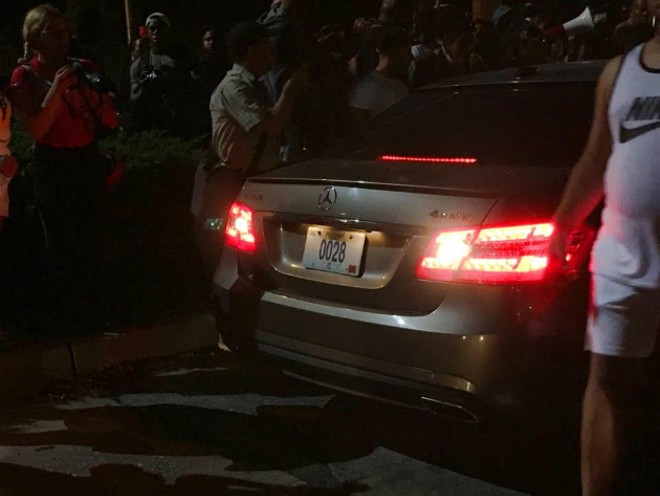 Franks says he does not know Lieberman but remembers the September confrontation.

"I can't remember if somebody yelled 'gun' or somebody said he had a gun, but when I got next to the window, sure as hell he had a gun," Franks tells the RFT.

Franks says the driver, now believed to be Lieberman, looked "paranoid" but eventually laid the gun down and raised up his hands in what Franks interpreted as a calming gesture. The crowd parted and the Mercedes drove away.

Lieberman lives near where the September 16 incident took place, in the 5600 block of Pershing Avenue in the Skinker DeBaliviere neighborhood. He and his wife split up in March, and court records show he kept the apartment and a 2011 Mercedes E350 in their division of property.

The former couple had previously sued Barnes-Jewish Hospital, his former doctor and Washington University in September 2016, alleging he was over-prescribed multiple opioids for chronic back pain. He suffered a disastrous addiction as a result, forcing him to go to rehab, according to the suit.

The case was contested, and Lieberman and his now-former wife eventually dismissed.
We welcome tips and feedback. Email the author at doyle.murphy@riverfronttimes.com or follow on Twitter at @DoyleMurphy.