Burglars Thwarted in Attempt to Break into Edwardsville Gun Shop 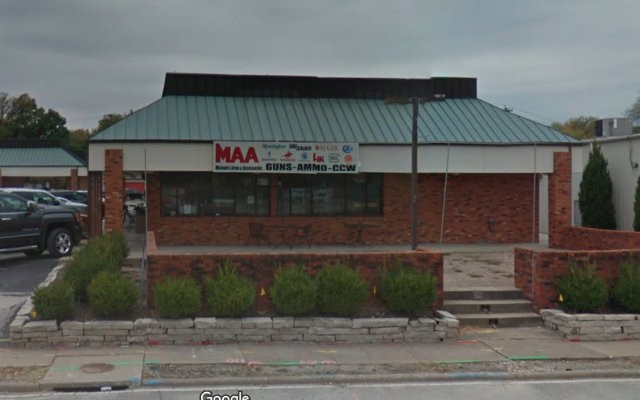 The Edwardsville gun shop Michaels Arms & Accessories was saved from a break-in around 3 a.m. this morning.

Edwardsville Police Lt. Charles Kohlberg told the Telegraph that the robbers attempted to break in by throwing bricks at a glass door at the shop's entrance. However, that plan totally failed when an alarm went off. And while the brick broke some of the glass, the rest remained intact thanks to reinforcing material, Kohlberg told the St. Louis Post-Dispatch. Police believe these factors prompted the burglars to run off without getting into the store.

A tweet from KMOV reporter Justin Andrews shows the damage below.

NEW: Suspects try to break into a gun store in Edwardsville. Just one of a string of gun store break-ins this month. LIVE report @KMOV #N4TM pic.twitter.com/ivDX6cQjua

Now the Telegraph reports that police are on the hunt for three suspects who were wearing face protection. Police are also teaming with the store's owner to get surveillance video.

Gun shops have been a frequent target in the metro area in recent weeks. As the RFT's Doyle Murphy reported earlier this week, four masked thieves broke into Southern Armory in Crestwood early Monday morning, taking off with an undisclosed number of long guns.

The Federal Bureau of Alcohol, Tobacco, Firearms and Explosives also reports that burglars made off with a number of guns after breaking into Razorback Armory in Des Peres on November 8. Both the ATF and St. Louis County police suspect the same robbers were behind two additional break-ins on November 10 — one at Triple Threat Armory in Affton and one at On Target in Valley Park. Whether the Crestwood robbery is connected with these break-ins is unclear.