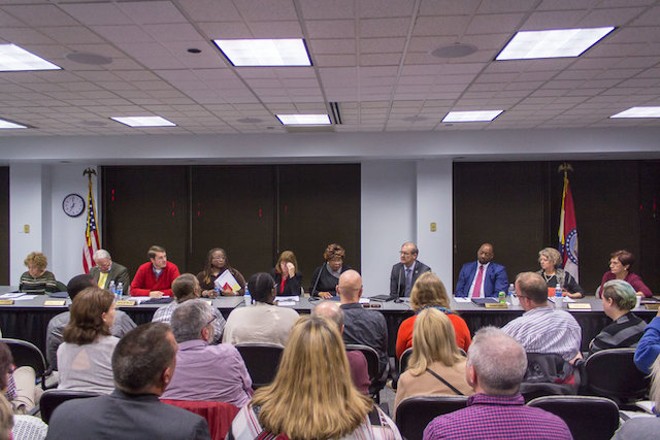 Trustees for St. Louis Community College will vote on a plan tonight to address a budget deficit that's expected to grow by $13 million a year by 2020. One proposal involves layoffs that could affect as many as 70 faculty members.

But some members of the STLCC community are questioning whether there might be another way. They argue that reckless spending by the administration got the college into its budget jam — and until that's addressed, it doesn't make sense to eliminate instructors.

For just one example: the compensation package enjoyed by Chancellor Jeffrey Pittman, who came to St. Louis to take the job in the summer of 2015.

The Missouri Department of Higher Education's "president and chancellor's compensation survey" has the details. It shows Pittman makes $260,000 as a base salary, which doesn't include the amount paid toward his retirement fund or his insurance. He also gets a housing allowance ($29,000 annually in FY 2016) and automobile allowance ($11,100 last year).

Pittman's $338,000 yearly package is more than all but one other president or chancellor of a two-year public college in Missouri, the survey shows. (The president of Ozarks Technical Community College, Hal Higdon, beat Pittman by just $1,000, according to the survey.)

That's hardly the only expense that has the faculty seething — but it's definitely generated a bit of buzz. (Suffice it to say, many adjunct instructors don't make $29,000 a year, much less get that for a housing allowance.)

In a statement, Stacie Manuel, a spokeswoman for SEIU Local 1, said,

Adjuncts feel that the board members have failed in their duty to the public they represent, but more importantly have failed in their duty to the students of St. Louis Community College on many levels, including the proposed reduction in force for full-time faculty and the failure of the school to take into account the impact of scheduling uncertainty for adjuncts on the quality of the education students receive.

“The call for a vote of no confidence comes after months of negotiations between the school and adjuncts. Adjunct faculty, along with students and other faculty members, have asked the school for better job security and more predictable scheduling in the contract, which would improve educational quality for students at little cost to the school.


In addition to the vote, faculty members have been working to come up with cost-cutting measures, which they believe could keep the board from its most draconian options.

“We support a win/win for STLCC,” Emily Neal, STLCC National Education Association vice president, said in a prepared statement earlier this week. “Administration does not have to put the Board of Trustees in the counterproductive position of supporting massive layoffs. A budget is never truly balanced until it’s aligned with the values of the entire educational community.”