The Gateway Pundit's Sidekick Arrested After Grabbing Woman in Connecticut 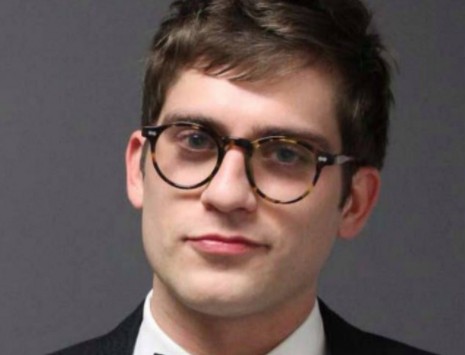 Controversial St. Louis-based blogger Jim Hoft spent last night railing against a "FAR LEFT MOB" after his sidekick was arrested after grabbing a woman from behind at the University of Connecticut.

Lucian Wintrich, who works for Hoft's site, The Gateway Pundit, was delivering a speech titled "It's OK to be White" on campus when people in the crowd interrupted and a woman snagged his notes, video shows. Wintrich chased her down, yanked her backward and began wrestling her for the papers.

Others in the audience joined the melee as police rushed in. Officers led Wintrich, dressed in a tuxedo, out of the room. He was later charged with breach of peace and criminal mischief and released on $1,000 bail, the Hartford Courant reported.

The moment, about half an hour ago, that Gateway Pundit blogger Lucian Wintrich appears to accost a woman during a speech at UConn pic.twitter.com/R4Dd9eY1v4

Wintrich, who is a credentialed as a White House correspondent, quickly returned to Twitter after he was freed.

"It's really unfortunate that some of the kids at @UConn felt the need to be violent and disruptive during a speech that focused on how the leftist media is turning Americans against each other," he tweeted. "Tonight proved my point."

Hoft, who regularly promotes crazy conspiracies such as #pizzagate on his blog, worked throughout the night to paint the incident as an attack by violent "commies," tweeting at one point, "We STILL have not located @LucianWintrich after his speech and the UConn riot tonight. He was last seen being chased down the street in a cop car by unhinged leftist punks."

BREAKING: @lucianwintrich appears to attack a @UCONN student during speech after she took something off podium. pic.twitter.com/WAcNYAak7c

The Courant reported that protesters repeatedly interrupted Wintrich during the controversial speech, growing louder when the far-right blogger claimed that liberals "want black people to dress like they did in Africa 300 years ago." He then switched to a slideshow photo of women in burkas, saying, "They want Muslims to dress they ways they've always dressed. The left wants them to seem like visuals advertisers for their multicultural utopia they're claiming to promote."

The incident with the woman followed shortly after. The Courant reported that a window at the building was later broken, and some students waited outside, running after the police car that carried Wintrich away.

A 19-year-old student was also arrested and charged with breach of peace and criminal mischief.