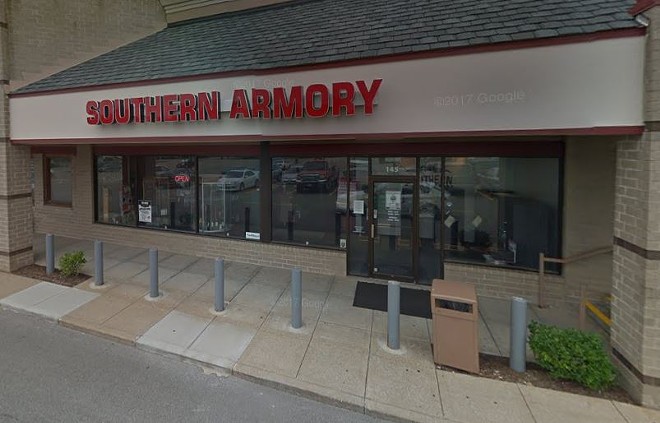 Four masked thieves smashed through the front window of a Crestwood gun shop early this morning and made off with an undisclosed number of long guns, police say.

As the burglars left the Southern Armory about 2:30 a.m., they noticed that a night stock clerk at a nearby Harbor Freight store had seen them, Crestwood Police Chief Frank Arnoldy says. One of the crew pulled out a handgun and squeezed off four rounds into the hardware store, narrowly missing the witness.

The burglars hopped into a small, four-door, silver-colored sedan and took off.

It's not clear if the early morning smash-and-grab was tied to other gun store break-ins that have occurred in recent weeks.

On November 8, burglars broke into Razorback Armory, 12072 Manchester Road in Des Peres, and stole several guns, according to the federal Bureau of Alcohol, Tobacco, Firearms and Explosives.

A little more than an hour later that day, at 3:13 a.m., the burglar alarm at On Target, 590 Vance Road in Valley Park, alerted county police to another break-in. The thieves stole fourteen handguns and one shotgun, authorities say.

In those three cases, the ATF says it's looking for a 2014-2016 Acura MDX. The color was described as "forest mist," and authorities say it can appear grey, silver or green, depending on the light. The ATF, St. Louis County police and National Shooting Sports Foundation are offering a reward of as much as $10,000 for information in those cases.

Arnoldy says he has not seen anything that shows those three cases are connected to the Crestwood break-in, but he stresses that it's still early in the investigation. Detectives are still trying to gather information, including any surveillance video.

The burglars used rocks to break through reinforced window glass at the Southern Amory, which sits in the Crestwood Center shopping plaza, 9901 Watson Rd. They apparently came prepared.

"They brought their own rocks," Arnoldy says.

The Harbor Freight sits in the corner of the outdoor shopping center with a view of the gun shop. A manager at the hardware store told the St. Louis Post-Dispatch that the night shift worker was calling 911 when the burglars shot at him.

"Four shots went through the windows," the manager told the paper. "One hit a computer screen."

The worker hit the floor and called for co-workers to call 911.