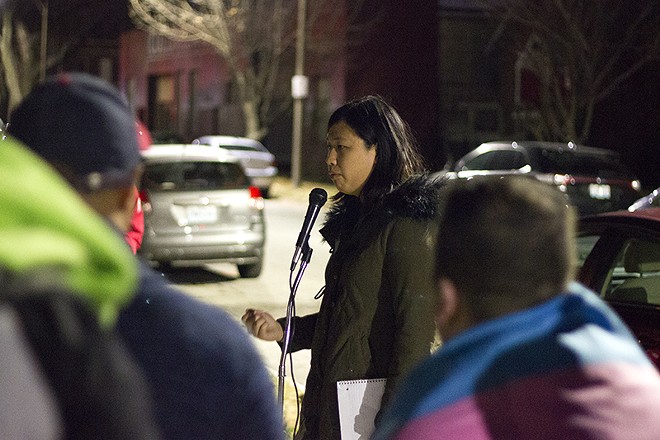 Last night, as a cold wind whipped at attendees holding candles and bundled in transgender pride flags, Elaine Cao made her way to the microphone set up on the sidewalk next to the Transgender Memorial Garden.

"These people don’t get respect from their own communities, from their own families," said Cao, referring to the 25 trans people killed in 2017.
The gathering marked the annual Transgender Day of Remembrance, which commemorates those trans people who have lost their lives violently in the past year.

See also: Trans Lives Honored at Vigil in the Grove

But for Cao, Monday marked a separate milestone: Earlier that day, she filed a lawsuit against her former employer, the Chess Club and Scholastic Center of St. Louis, alleging that a manager fired her after she came to work presenting as female.

According to her lawsuit, Cao, 24, was hired at the chess center in June 2015. One year later, on June 25, 2016, she showed up to work a trans woman. Cao's manager responded by firing her, the lawsuit alleges.

"I believe I was discriminated against," Cao claims in the lawsuit, "in that my employer took my gender into account and terminated me for gender non-conforming appearance and behavior, and for transitioning from one gender to another and for for being a transgender individual."

A spokesman with the chess center declined to answer questions about the suit or confirm Cao's former employment, citing the center's policy to not comment on pending litigation.[See update below.]

Cao is representing herself in the lawsuit, and said she didn't feel comfortable discussing the details of her allegation on the record. However, her lawsuit's reference to discrimination based on gender non-conformance seems to draw on a landmark ruling from Missouri's Western District Court of Appeals in October. Although the Missouri Human Rights Act does not protect against discrimination for sexual orientation, in that ruling, the court concluded that an employer cannot discriminate on the basis of sex stereotyping.

In the ruling, Judge Anthony Rex Gabbert wrote, "The prohibition against sex discrimination extends to all employees, regardless of gender identity or sexual orientation."

Whether that ruling applies in this case remains to be seen. But for Cao, the lawsuit represents the culmination of more than a year of painful struggle. Just days after she was fired in the summer of 2016, Cao says her parents kicked her out of their home. She spent the next four months depending on the goodwill of her friends, sleeping on couches and putting her life back together.

"I just think to myself I could have been one of these people," she says, referring to the trans people who lost their lives in 2017. "I could still be homeless now, I could be on the streets."

Instead, she says that she's now working two jobs and earning her own way. Her lawsuit seeks damages of $150 for every week that's passed since her firing, which to date amounts to about $11,000.

The Chess Center sent us this statement one day after we published our story:

While the Chess Club is not at liberty to discuss the specifics of any pending legal matter, we strongly condemn any form of discrimination and unequivocally deny any allegation that the Chess Club engaged in discrimination with respect to Ms. Cao. The Chess Club is committed to providing an environment that is welcoming to people of all walks of life and does not discriminate against anyone on account of sex, gender identity, sexual orientation or any legally protected characteristic.