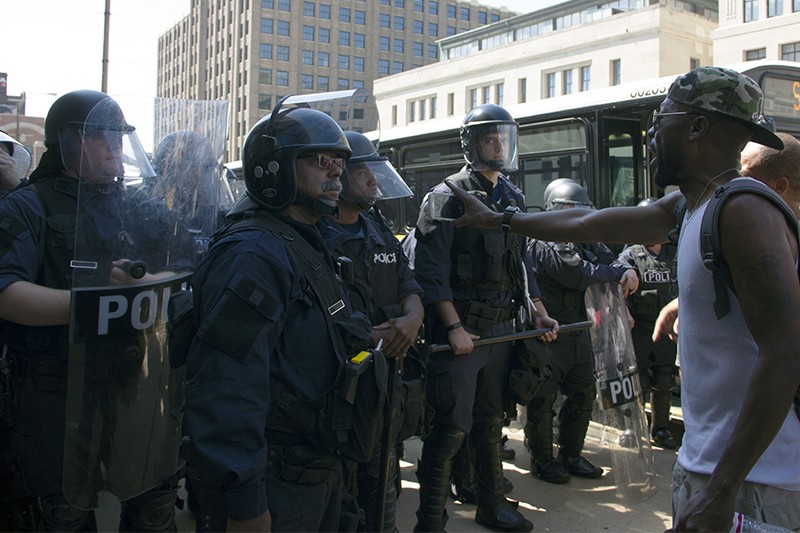 The Justice Department has opened an investigation of the city police department's response to protests following the September acquittal of an ex-cop accused of murder.

Federal prosecutors and FBI agents in St. Louis will be looking for potential violations of civil rights during the demonstrations, which began almost immediately after former police officer Jason Stockley was found not guilty.

Within hours of Judge Timothy Wilson's verdict on September 15, police had made their first arrests and maced multiple activists who had gathered south of the St. Louis Circuit Court on Tucker Boulevard.

Hundreds of arrests have followed, along with accusations of police brutality. The allegations include reports that officers beat, pepper sprayed, arrested and tear gassed protesters, journalists and bystanders as a way of retaliating against criticism leveled at officers.

Recently appointed U.S. Attorney of the Eastern District Jeffrey Jensen told the St. Louis American that the Justice Department would "ensure there is a fair, thorough and impartial investigation." The paper first reported the news of an inquiry.

The revelation follows a decision by U.S. District Judge Catherine Perry last week to grant a request from the American Civil Liberties Union of Missouri for a preliminary injunction, restricting police officers' action when it comes to dealing with protesters.

"Plaintiffs’ evidence — both video and testimony – shows that officers have exercised their discretion in an arbitrary and retaliatory fashion to punish protesters for voicing criticism of police or recording police conduct," Perry wrote in a memo explaining her order.

The ACLU is suing the city on the behalf of demonstrators who say police violated their civil rights. Perry referred the case last week to mediation.

"While it is important that the federal government investigates the systemic violation of civil rights by the St. Louis Metropolitan Police Department, the city of St. Louis should proactively engage with the community now to develop a collaborative policing model that protects constitutional rights and promotes public safety,” ACLU legal director Tony Rothert said today in a statement.

Following Perry's decision, U.S. Rep. Lacy Clay (D-Missouri) called on the Justice Department to investigate the police force, describing St. Louis as the "poster child for the need of federal intervention to address decades of bad police relations that reinforce the decline and erode the trust of police-community relations.”

Today, he praised the U.S. Attorney's decision to open an investigation: "I am very gratified that US Attorney Jensen and the Department of Justice have responded so quickly to my request for a civil rights investigation regarding the allegedly constitutional ‎actions by police after the Stockley verdict. The First Amendment is vital, because like our local police, it defends everyone. Both are essential to our country and our community."

Interim police Chief Lawrence O'Toole has backed the work of his officers during the protests. Just hours after police penned in more than 100 people and arrested them, he bragged that police "owned the night" during a news conference attended by Mayor Lyda Krewson.

The night of mass arrest has become one of the most infamous incidents during the ongoing protests. People swept up in "kettle," including a Post-Dispatch reporter, claimed they were assaulted by officers even as they complied with their orders.

Krewson and O'Toole later called for a federal investigation of the police department. In a statement issued today, the mayor says she and the interim chief continue to support an "independent, third-party review" of the department.

"We are pleased that is under way and we appreciate the U.S. Attorney's Office for its work and professionalism," Krewson says.