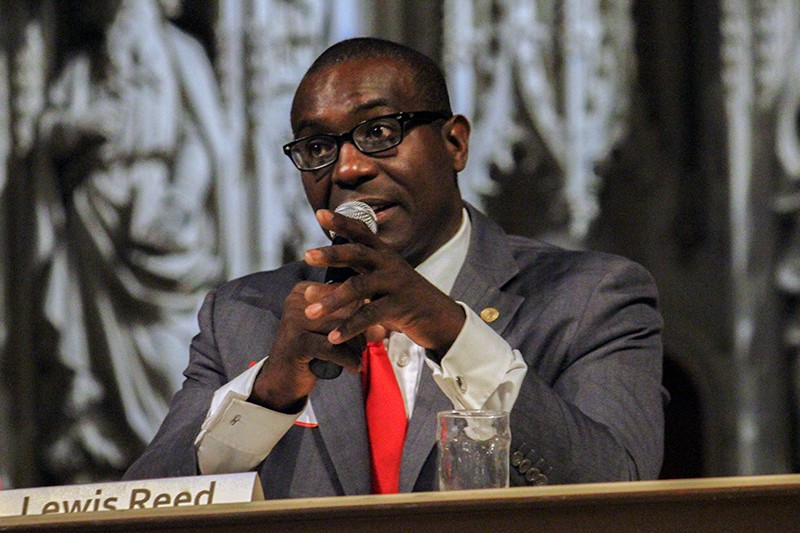 It didn't take long for Lewis Reed, president of the city's Board of Aldermen, to find reasons to slam the sweeping cannabis legalization measure proposed by Alderwoman Megan Green. Apparently, it's such a bad bill that Reed didn't even have to read it very carefully.

Green's bill, filed last month, seeks to drastically alter the city's cannabis laws, which currently allow officers to treat first or second infractions of marijuana possession under 35 grams as a municipal violation, instead of a matter for state court. The Green bill would amount to legalizing pot possession for personal use.

Reed saw something dangerous in Green's proposal — so he took his concerns, naturally, to NextDoor. In a 1,200+ word post, which he later reshared on Facebook, Reed compared Green's bill with the prevailing cannabis laws in Colorado. But the post was riddled in inaccuracies.

For instance, Reed's very first comparison claimed that while Colorado's laws permit users to buy one ounce, Green's bill would permit the purchase or sale of two ounces. Except Green's bill, Board Bill 180, doesn't permit anything of the sort. The bill wouldn't make buying or selling weed legal, only its possession up to two ounces.

So numerous were Reed's misstatements in the post that the St. Louis chapter of national cannabis legalization group NORML published a detailed takedown that annotated Reed's claims with corrections on virtually every detail.

Seemingly in response, Reed reached out to NORML and attended its monthly meeting last week. Did he walk back the inaccuracies in his NextDoor post? Just the opposite. In fact, during the meeting, he doubled down on his points, and then, days later, he proposed his own cannabis-related bill — one that would eschew the ambitious decriminalization of Green's measure in favor of simply lowering the $100 to $500 fines now assessed for pot possession to $25 to $50.

According to a recording of Reed's remarks to NORML, his concerns focus on the ways in which Board Bill 180 "could be exploited" by drug traffickers and gangs.

"To give an illegal enterprise an opportunity to expand, I think that's a scary thing," Reed said at the November 14 meeting.

Reed conceded that he based his view of the bill on his own interactions with troubled youth and gang members. On NextDoor, he elaborated, writing, "The bill would inadvertently create an incentive for non-residents to come to the City of St. Louis to participate in illegal drug sales, distribution and consumption."

Still, it's worth noting that Reed's position on the bill goes a bit further than his point about gang connections. He alleges that Green's bill would bar employers from refusing to hire someone who comes into a job interview stoned, as well as prohibiting officers from citing motorists with weed in their car. Neither circumstance is mentioned in Green's bill, and Reed seems to ignore its other provisions — and common sense — that would support a boss's decision to reject a high-as-balls job applicant.

Green's bill also prohibits public weed use, which includes "any street, alley, park, sidewalk, public building other than individual dwellings, or any place of business or assembly open to or frequented by the public, and any other place to which the public has access."

Green's bill is aggressive in its attempt to legalize cannabis in St. Louis. It even includes a provision stipulating that any city employees (including cops) who use city resources to go after people 21 or older for low-level marijuana possession "will lack the lawful authority to do so" and would be subject to "discipline under the laws and rules pertaining to the Department of Personnel."

Despite the differences in their proposals, Reed and Green — who have a fairly toxic political history — do agree, however, that St. Louis would be better off with a state-wide cannabis legalization measure, one passed either by the ballot or through the legislature. At last week's NORML meeting, Reed added his name to medical marijuana petition currently being circulated by New Approach Missouri.

Karin Chester, executive director of Greater St. Louis NORML, tells RFT that she's in favor of "anything that reforms marijuana laws," but she disagrees with Reed's take on Board Bill 180.

"This all goes back to the 'reefer madness' mentality," says Chester, adding that although Reed's bill, Board Bill 193, seems to resembles a recent ballot measure passed in Kansas City, she'd like to see Reed's offering amended to remove penalties for possession of paraphernalia.

"The most dangerous thing about marijuana is that it’s against the law," Chester says. Green's bill, which targets law enforcement resources going toward marijuana cases, "creates a de facto legal legal environment, which is not ideal."

"The ideal," explains Chester, "would be if we could put into place a system for dispensaries and cultivation. That's not possible right now, but I think [Green's bill] gets us as close to that as we can possibly get right now."