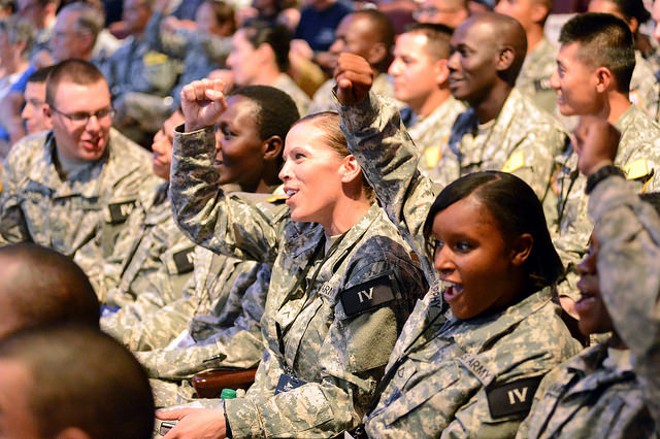 Fort Leonard Wood, the sprawling Army base located two hours south of St. Louis, showed a 71 percent increase in reports of sexual assault from 2013 to 2016, according to a previously confidential database released publicly for the first time Friday morning.

The number of sexual assaults reported at Fort Leonard Wood, one of the Army’s main training bases, jumped to 130 in 2016, compared to 76 in 2013, according to data compiled annually for the Defense Sexual Assault Incident Database, or DSAID.

The 130 sexual assaults reported at Fort Leonard Wood in 2016 was the third highest total worldwide for any U.S. Army base for that year, according to the database.

In an unprecedented move toward transparency, the Pentagon released the sexual assault data for specific military bases in U.S. and worldwide after receiving a FOIA request from the RFT.

DSAID was authorized by Congress in 2009, and fully implemented in 2013. But up until today, the Pentagon had withheld media requests for an installation-by-installation breakout of sexual assault data.

On Friday, however, the Defense Department publicly released the DSAID. The 25-page PDF categorizes reports by base across a four-year period.

There’s a lot it doesn’t reveal – the rank of those complaining, the specifics of the allegations, and even if the victim is a man or a woman.

Overall, though, the database shows that 6,172 sexual assaults were reported in the U.S. military for 2016 — a record high and an 11 percent increase over 2013, according to the DSAID data, which were released by the Pentagon’s Sexual Assault Prevention and Response Office.

These numbers reflect a dramatic leap from 2012, when more than 3,600 cases were reported. To some extent, that’s good news, experts say, because the higher number of reports indicates growing confidence in the military’s criminal justice system and the belief that such reports will not result in retaliation against them.

Still, each report represents a service woman or man alleging a serious violation.

A base spokesman referred questions to the Department of Defense headquarters in Washington, D.C.

See also: It's Not Just Service Men and Women Traumatized by Military Sexual Assault. Their Families Also Pay the Price

Not every base showed an increase over the four-year period. In contrast, Scott Air Force Base — located 20 miles east of St. Louis and the Illinois home of the U.S. Transportation Command, the Air Force Air Mobility Command and other major commands — showed a 20 percent drop in reported sexual assaults over the same three-year period.

A total of 57 cases of sexual assault were reported at Scott between 2013 and 2016, with 16 of the cases restricted, and the rest unrestricted.

A spokesperson for the base was not available to comment for this story.

The release of DSAID information about a particular military installation could prove useful to the people who work at the base, as well as service members stationed there, says Lory Manning, a retired Navy captain and director of governmental relations for the Service Women’s Action Network, which has fought hard to reform how the U.S. military deals with sexual assault.

“They might be very upset if there is a particular problem at their base,” says Manning, who remembers a time when the military did not even bother to keep records on sexual assault. “They might begin to put pressure on it. I can see that happening.”

Nate Galbreath, the deputy director of the Department of Defense’s Sexual Assault Prevention and Response Office, told the Riverfront Times that sexual assault data had in previous years been reported in aggregate numbers to Congress, but never broken out by installation.

This reporter previously asked for database while working at a different newspaper in 2015. The request was not satisfied. This year, however, the Pentagon fulfilled the FOIA request after determining that releasing the requested data on an installation-by-installation basis would not compromise the confidentiality of victims, Galbreath says.

Since that first FOIA request was filed, Galbreath says his data team looked at the largest and smallest military bases to see what kind of stories were in local news media or were online. The goal was “to determine whether or not you can tell that, for example how many sexual assault reports were made at Cannon Air Force Base, in New Mexico, a very small place, would you be able to identify a victim of sexual assault by just knowing the number of reports were made there?” Galbreath said. “And the answer is no.”

The vast majority of the sexual assault reports occurred at military bases located in the continental United States. As for overseas combat theaters, Afghanistan reported the most cases in 2016 — 25. But that reflects a sharp drop from 2013, when there were 168 total reports, according to the database.

Troops stationed in Kuwait also reported 25 sexual assaults in 2016, according to the database.

The DSAID database is divided into restricted and unrestricted reports for each military based and branch of the service.

Restricted reports allow the people who make the report to seek medical care, counseling and advocacy, but without the report being referred for criminal investigation or to the unit commander.

An unrestricted report, in contrast, consists of an allegation by an individual against one or more other individuals and is referred to military or civilian law enforcement. The unit commander is also notified.

Another important caveat to the data, Galbreath says, is that sexual assaults reported at a given base for a given year might not have necessarily have occurred at that base for that year. The reported assaults might have happened at another installation, off-base at a civilian venue or even before the service member had entered the military, Galbreath says.

On May 1 of this year, Navy Rear Adm. Ann M. Burkhardt, Galbreath’s boss, unveiled the Pentagon’s Annual Report on Sexual Assault in the Military for fiscal 2016. Burkhardt said during a news briefing that the report shows 14,900 troops say they were sexually assaulted in 2016 — which is 5,400 fewer than the 20,300 sexual assault victims estimated for 2014.

The fiscal 2016 report also shows that one in three of those who say they were assaulted last year chose to report it — a jump from one in four troops who reported assaults in 2014, Burkhardt said. In contrast, only one in fourteen service members reported sexual assaults as recently as a decade ago, according to Burkhardt.

Fort Leonard Wood, one of the largest military installations in the Midwest, is home to the U.S. Army Maneuver Support Center. About 7,000 men and women in uniform are stationed there, with 12,000 more passing through there for training and 9,000 civilian employees.

With 130 sexual assaults reported in 2016, the base had the third-highest number of reports across the U.S. Army.

The only Army bases with higher numbers were Fort Hood, outside Killeen, Texas, with 199 reports in 2016, and Fort Bragg, near Fayetteville, North Carolina, with 146 reports.

Fort Hood is home to the Army’s First Army Division West and many other units. Fort Bragg, is home to 50,000 active duty personnel, including the storied XVIII Airborne Corps and the U.S. Army Special Operations Command.

The Pentagon’s release of its sexual assault database comes at a time when the U.S. military is seeking to get a handle on sexual assault in the ranks after many years of seemingly doing little about the problem.

What’s more, DSAID’s public release is occurring against a backdrop of unprecedented controversy over the issue of sexual assault in civilian America, as hardly a day has gone by in the last month without another celebrity or politician getting hammered by allegations of inappropriate sexual behavior.

On Thursday, U.S. Senator Kirsten Gillibrand (D-New York), held a press conference in Washington, D.C., to announce the re-introduction of the Military Justice Improvement Act. The measure would give military prosecutors the power to send to trial serious criminal cases, including those involving sexual assault. In contrast, under the current system, unit commanders have the final say in whether to send a case to trial.

“Military officers don’t have the legal training that they need to make such difficult decisions that in the civilian world would be handled by district attorneys with years of experience,” Gillibrand said in a statement.

Mike Fitzgerald is a contributing writer for the Riverfront Times. He can be reached via email at msfitzgerald2006@gmail.com.

Turn the page to see the complete DSAID database.