Chief Wana Dubie Gets His Final Wish: Ashes Scattered Where Pot Is Legal

Missouri pot activist and perennial candidate for statewide office Chief Wana Dubie has journeyed to his final resting place, Pikes Peak, the first place he ever smoked a legal joint — although the act of smoking it there was probably illegal.

Born Joseph Bickell in Flint, Michigan, he had his named legally changed to Wana Dubie. Here in Missouri, he ran for state representative, governor and the U.S. Senate, garnering 30,000 votes.

His journey to his ultimate destination above Colorado Springs was a colorful one, starting with an infamous mugshot in the local Osage County, Missouri, paper — The Unterrified Democrat (the newspaper’s actual name) — in the early '90s.

Wild-eyed and disheveled, Bickell had a pot leaf tattooed on his forehead.

He had been selling marijuana, and quite a bit of it, from what the locals say.

“He was more upset that people he thought were his friends were actually federal agents,” said family friend Sarah Plank, from Salem, Missouri. “He was way more upset about that than the fact he was going to prison.”

Wana Dubie served every day of his five-year sentence, telling parole officers there’s no way he would pass the drug tests upon a conditional release, nor was he willing to.

But that wasn’t his first act of defiance, nor would it be his last.

At 18, when the state of Michigan raised the legal drinking age to 21, he stole a beer truck and held it hostage. Around that same time, he began his lifelong love affair with marijuana. At one point, he claimed he had seceded from the Union, that he was allowed to do so because of his Native American heritage, and he set up his own nation somewhere near Mt. Sterling, Missouri, population 23. 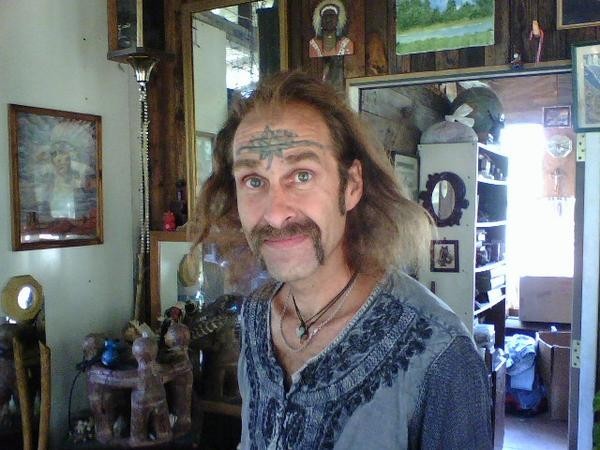 During his time at the state's Algoa Correctional Facility, he did his best to be a thorn in the side of everyone who worked there.

He still holds the unofficial record for most complaints filed in one day at more than 250 (they’re legally required to answer each one), reported the Salem News. When his beard grew too long for prison rules — two inches — he was told to cut half of it off. The next day he had one cheek clean shaven. After his release, he was briefly incarcerated again.

Eventually, he made his way further south in Missouri and settled deep in the Ozarks, where he ran for state representative in 2006. Two years later, he found his way onto the statewide ballot, this time for governor. In 2016, he took on U.S.

Sen. Roy Blunt and the Dubie vs. Blunt campaign was launched, much to the delight of stoners everywhere. Wana Dubie’s platform pushed several reforms, but at the center, of course, was legalizing marijuana.

“For someone who hated politics, he was deeply political,” Sarah Plank said.

The Associated Press picked up the story, and Wana Dubie’s political career was catapulted into the national spotlight. He never won a race. It would be at higher altitudes that he claimed his own personal victory though, when he — fierce advocate of legalization — bought a joint in Colorado, went to Pikes Peak and fired up.

As the RFT first reported last month, his kids waived financial responsibility, and Dent County had him cremated. The Chief appeared headed to a pauper's grave.

Sarah Plank decided that wasn’t good enough. The 27-year-old cosmetologist wanted the Chief’s dying wish to be granted — to be laid to rest on Pikes Peak.

“He literally died thinking his children hated him. He said that on the day he died. How sad,” Plank said. “Why should he die sad and lonely and not getting his final wish? Good people should get what they deserve. They rarely do, though.”

So for the past three months, Plank has been holding benefits, selling T-shirts, and taking donations to bring Chief back to the mountain. By early November, she had collected the $900 needed to get his ashes out of hock and made plans to travel with Wana Dubie’s remains to Colorado with her husband, Zachary, who works in Southern Missouri’s logging industry.

They flew to Denver this week — Plank’s first time on a plane — and reveled in the Colorado culture before winding their way up to Pikes Peak.

At 13,440 feet, the Planks had to pull over. Hurricane-force winds meant the road was closed beyond that.

And with that, she walked up the rocky incline a little higher, and let Chief Wana Dubie fly.

Chief would have been happy with that spot, she said, and she was happy to have brought him there.

“It’s secluded and it’s high up,” she said. “At the county, you don’t get a head stone. He would have been sitting there with a number plate.”

Chief Wana Dubie, who spent a lifetime fighting the establishment, has finally been laid to rest on “America’s Mountain,” a paradox that would not have been lost on him.

This story was first published by Colorado Politics. We've reprinted it with permission.