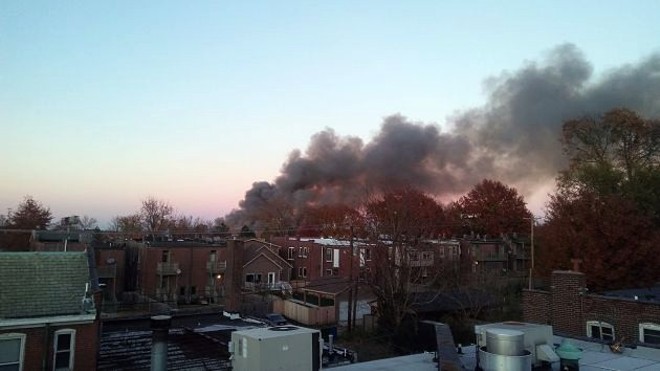 Good news! The EPA is in town today because of that big ol' fire everyone's been talking about, and the organization has determined that it was probably totally fine for the residents of south St. Louis to inhale all that pitch-black smoke for more than 24 solid hours. Phew!

On Wednesday, the fire department warned that the smoke may be toxic, even going so far as to recommend that nearby residents keep their windows closed and turn off their HVAC systems — striking fear into the hearts of health-conscious St. Louis residents caught in the plume's (very wide) path. With the fire now under control, however, that warning has been lifted.

And the Post-Dispatch reports that the Environmental Protection Agency, which stopped by this morning, "didn't find anything concerning beyond the hazard of the quantity of smoke for those with respiratory problems," according to St. Louis Fire Capt. Garon Mosby. What a relief!

The five-alarm fire, which started in the basement of a warehouse at 3937 Park Avenue early Wednesday and was still smoldering as of this morning, was reportedly fueled by some 150,000 citronella candles, a lot of styrofoam, some car seats and a heartbreakingly large stock of locally published books — all things that apparently are perfectly healthy to inhale when set aflame.

And those are just the things we know about! Investigators are still taking stock, but the massive warehouse surely held lots more stuff that our government officials will assure us is totally OK to coat your lungs with in combusted form.

But some residents — for some crazy reason — are still a bit concerned.

KSDK spoke with a now-former south city resident who expressed doubts about the official assessment, and who has chosen to move his family to Florida rather than stick around (OK fine, he was already planning that move, but still).

"Everybody is going to be wondering if this is going to have repercussions in a few months," John Goetschel told the station. "Because nobody knows what was in there. Nobody said anything about staying far enough away, so we just stayed within the block."

Goetschel adds that he believes the smoke was "very unhealthy, that's for sure."

Relax, you hypochondriac! The EPA says everything is fine. South city residents, feel free to take in a big ol' lungful.

After all: What reason could we possibly have not to believe them?