In a decision released this morning, U.S. District Judge Catherine Perry sided with activists and the ACLU of Missouri, granting a request to set new restrictions on the way police officers respond to demonstrations.

Perry cited numerous incidents, including the mass arrests downtown on September 17, in finding there was enough evidence to support a preliminary injunction.

The federal judge's 48-page memo and order dictates new rules of engagement for officers responding to protests. They include prohibitions against declaring protests unlawful when there aren't threats of violence and using chemical agents against people expressing their constitutional rights.

The ACLU sued the city on September 22, a week after a judge found former St. Louis police officer Jason Stockley not guilty in the 2011 killing of Anthony Lamar Smith. Protests began almost immediately after the verdict was announced.

The lead plaintiffs in the case, Maleeha Ahmad and Alison Dreith, both testified they were pepper sprayed in the face without warning. Ahmad says she and other protesters were non-violently blocking the path of a Metro bus filled with police in riot gear when an officer sprayed her.

Dreith, the director of Missouri's NARAL chapter, says she was just one of the protesters in the crowd when an officer got her.

The ACLU attorneys argued during a three-day hearing last month that police followed no clear rules when responding to protests, giving any cop the power to declare demonstrations to be "unlawful assemblies" and go after protesters.

"Plaintiffs’ evidence — both video and testimony – shows that officers have exercised their discretion in an arbitrary and retaliatory fashion to punish protesters for voicing criticism of police or recording police conduct," Perry wrote. 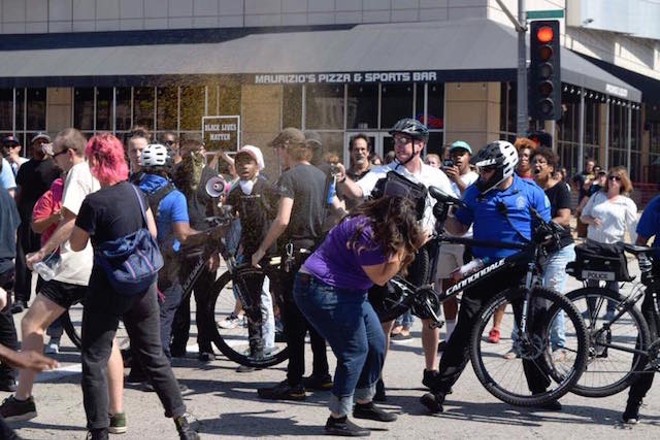 Perry also focused on the mass arrests on September 17. The so-called "kettle" swept up protesters, neighborhood residents and journalists. Video from the night shows officers surrounding people at Washington and Tucker before blitzing them with mace and roughly dragging them across the pavement. People caught up in the kettle claim officers taunted and beat them.

Perry says there seemed to be no evidence of violence or criminal activity to justify the police actions.

"Plaintiff's evidence of the activities in the Washington and Tucker intersection on September 17, 2017, shows no credible threat of or violence to officers or property... " Perry wrote.

“This court decision is a win for the people of St. Louis and for the First Amendment,” said Tony Rothert, legal director of the ACLU of Missouri. “By requiring police to adopt these common-sense solutions, we can protect rights of the people to express their concerns about the troubling racial disparities in policing.”

"We appreciate the time and effort of Judge Perry, and we will comply with the order of preliminary injunction," the statement says.

The preliminary injunction was filed as part of an overarching suit filed by the ACLU. No trial date has been set in the case.

This story was updated after publication with a statement from the city.