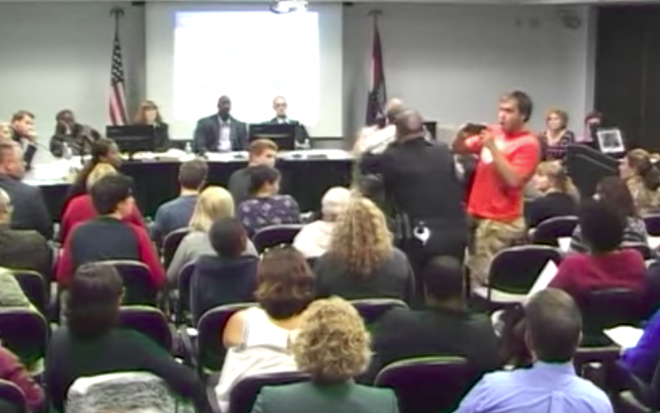 Last month, the public comment section of the board of trustee meeting for St. Louis Community College turned ugly — with an instructor being body slammed by a police officer and then arrested. Captured on video, the fracas earned the district unwelcome headlines everywhere from the Daily Mail to the New York Times.

This month, the college is prepared.

In advance of the board of the trustee meeting scheduled for 6 to 8 p.m. tonight in the campus' Cosand Center (300 South Broadway), the college's marketing and communications team emailed a set of guidelines around campus.

There is to be no booing and no applause — the very rule in place that adjunct instructor Steve Taylor objected to before being taken down by a St. Louis police officer. All speakers must sign up before 6 p.m., a rule apparently designed to stop anyone from speaking extemporaneously, as Taylor did.

Oh, and there had better not be any repetition.

You read that right. In the eighth bullet point on the list disseminated by the college, readers are told, "A person addressing the Board shall refrain from making insults; using obscenity or profanity; attacking any person in his/her personal capacity; physical violence or threats; or making comments that are unduly repetitious."

The email did not clarify who will judge whether a comment has crossed the line from "merely duplicative" to "unduly repetitious." However, it did include this warning: "Persons who disrupt, disturb or impede the orderly conduct of the Board meeting will be ejected."

Because space in the Cosand Center is limited, and the email also makes it clear that overflow will not be allowed (anyone who doesn't get a sit will be stuck watching via Skype in an overflow room), members of the Service Employees International Union Local 1 will be demonstrating outside the meeting instead, beginning at 5 p.m.

The district is facing a big budget shortfall, and its leaders are weighing a plan that would cut up to eighteen percent of full-time faculty members — as many as 70 people.