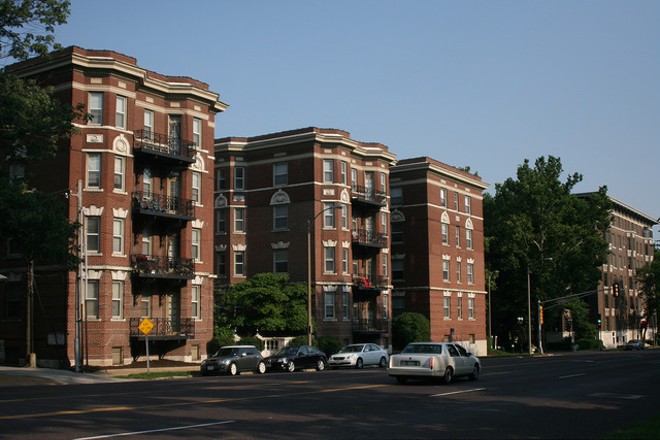 Just because housing is cheap doesn't mean it's affordable — as a new study shows that nearly half of St. Louis renters struggle to afford their apartments.

The study, conducted by housing search site Apartment List, found that across the U.S., the percentage of cost-burdened renters has dropped to its lowest point since 2008. (The site defines "cost-burdened" as those spending 30 percent or more of their monthly income on rent.) From 2005 to 2016, as the economy has strengthened, cities such as Boise, Minneapolis and Cleveland have seen cost burdens drop as wages rose.

But in St. Louis, the study found, a nine percent increase in wages was matched by a nine percent increase in rental prices — the unfortunate byproduct of the region's surprisingly hot housing market in recent years. With rents growing just as fast as incomes, St. Louis now finds itself a (far) less extreme version of cities like Los Angeles, Miami or New York City — one in which the rent feels too damn high for many residents.

Indeed, during that time period, the study found that the St. Louis region saw a higher percentage increase in rental costs than Chicago, Atlanta and Orlando, not to mention our fellow Rust Belt cities like Detroit, Milwaukee and Cincinnati.

For the city's least fortunate, that's a huge problem: 22.7 percent of St. Louisans are now "severely cost-burdened" — paying 50 percent or more of their income on rent. (That's roughly in-line with the national average, the study found.)

While those numbers are for the metro area as a whole, the study also broke things down further. Apartment List's data shows that the problem is slightly worse in the city — but only slightly. In the city, 47.7 percent of renters are cost-burdened; that's true of 44 percent in the county. When it comes to being severely burdened, 26.2 percent of city renters fit the bill, which is true for 21.7 percent of renters in the county.