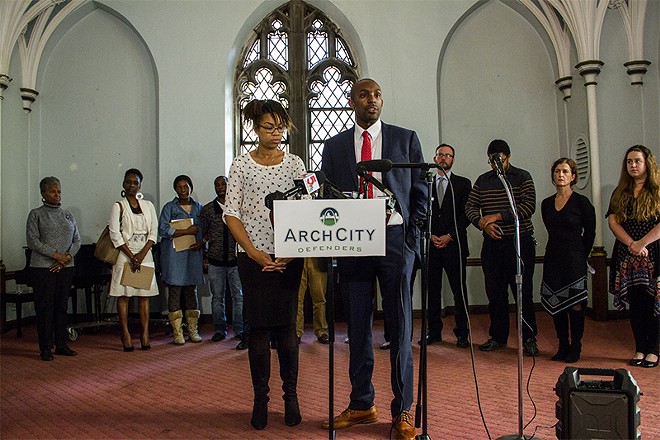 Temperatures that reach 125 degrees Fahrenheit in the summer, with frigid cold in the winter. Infestations of mice, rats, snakes, ants and the largest roaches one inmate had ever seen — as well as bed bugs and brown recluse spiders. Black mold and overflowing sewage.

Those are all part of the abjectly wretched conditions at St. Louis' Medium Security Institution — better known as the Workhouse — detailed in a new class-action lawsuit.

Filed this afternoon by ArchCity Defenders, the suit seeks to represent everyone who's been locked up in the jail at any point from November 2012 to the present. That's a potential class of thousands of people, many of whom weren't convicted of a crime prior to their stay — 99 percent of detainees in the Workhouse simply lack the money to post bond while awaiting trial.

The "unspeakably hellish and inhumane conditions" violate the first, eighth and fourteenth amendments, the nonprofit law firm alleges. It's asking a federal judge to issue injunctive relief — either to shut it down or to fine the city until it ensures that the jail complies with the rights guaranteed by the U.S. Constitution. The suit also seeks damages to compensate the detainees for the harm they've suffered.

Blake Strode, who was recently named the firm's new executive director, announced the suit at a press conference this afternoon, along with Decarcerate St. Louis and state Representative Joshua Peters (D-St. Louis).

Nicole Nelson, a staff attorney with ArchCity, said the attorneys met the clients named in the suit over the summer while working to provide relief from the dangerous heat — and heard harrowing stories that went far beyond the facility's lack of air conditioning.

Diedre Wortham, who was locked up in the Workhouse for two months this summer, said, "It's terrible in there. They've got us in there like we're just slaves, and there's nothing we can do about it."

Added Wortham, "If you have any type of medical problems, they'll leave you for dead in the Workhouse. ... I didn't think I'd make it out of the Workhouse alive."

Vincent Grover, who was also detained in the workhouse last summer, said the windows had no screens, so that rain fell freely into the facility. Mice were everywhere, with their waste all over meal trays and even on the food. "If you see the mice feces, just scrape them off," he says kitchen workers were told.

Grover added, "Imagine going to shower and there's human feces in the shower. Who's going to get it out? You go and tell an officer, he's going to say, 'So what?'"

In addition to the physical conditions in the aging building — which the RFT personally witnessed in an undercover visit in August — the suit accuses the city of creating "an environment that promotes violence and retaliation."

"Sometimes this violence is perpetuated by the Workhouse officers themselves; other times, the staff merely allow violence between the detainees as a way of 'teaching a lesson,'" the suit notes. "Actions as minor as requesting a medical form can result in a detainee being the recipient of anger, screaming, and cursing by jail staff."

In the women's unit, the suit alleges, "Certain officers ... would allow, and even encourage, fights without intervening. These officers would taunt the women into fighting and then decide who 'won.'" The officers would pretend to stop the fights if a supervisor stopped by.

Another officer earned a reputation for stopping by when the women were in the showers and observing them, even while pretending he wasn't watching, the suit alleges.

One detainee whose story is told in the lawsuit alleges that staffers tried to cover up how bad conditions were when outsiders visited.

Kennard Williams of Decarcerate St. Louis said that the activists had worked to bring the problems to the attention of the past mayor's office, the current mayor's office and the St. Louis Circuit Attorney's Office.

"All we've seen at this point is a game of passing the buck between the mayor's office and the circuit attorney," said Williams.

See also: This Place Is Hell: An Undercover Trip Inside St. Louis' Workhouse

Editor's note: A previous version of this story provided the incorrect name for one of the plaintiffs being quoted. We regret the error.