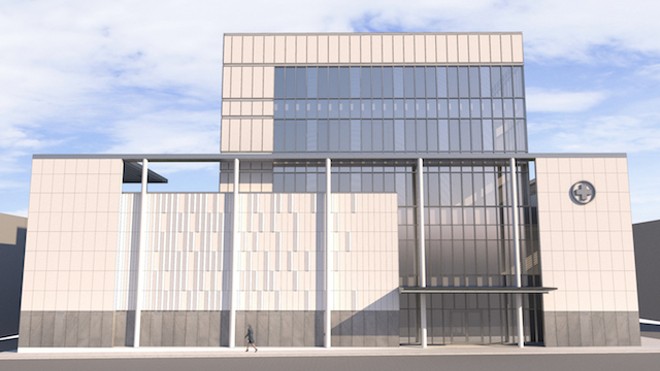 A pair of heavy hitters want to bring something altogether new to St. Louis — a micro-hospital.

Pamela Walker, the city's former health director, and Dr. Sonny Saggar, the chairman of the emergency department at St. Alexius, as well as the owner of several urgent cares, say they have commissioned architectural renderings and are lining up investors for a brand-new, 80,000-square-foot building on the corner of Locust and 15th Street. The site is currently a vacant lot owned by Saggar.

Their vision wouldn't just be a rare bit of new construction in an area that tends to see mostly rehabs. It would be a new model for how care is handled in the city — a hospital would bridge the gap between urgent cares and regional hospitals like Barnes-Jewish.

As Saggar explains, ambulances won't — and can't — take patients to urgent cares. EMS workers cannot perform the diagnoses necessary to make sure a patient doesn't need a doctor right now, not just in a few hours. A micro-hospital, which offers a fully functioning emergency room, is a different story.

Beyond that, it offers the kind of self-contained universe that means a patient can get coordinated care — everything but major surgeries and acute care. In those rare cases, the patients could be transferred to regional powerhouses.

"We'll be able to look at 95 percent of the problems that come in," Saggar says. "Ninety-five percent of problems do not need a specialist. And so this is really the next evolution after the urgent care."

Micro-hospitals generally have somewhere from 12 to 30 beds, says Michael Schnaare, a principal at the Lawrence Group who worked on renderings for the business partners. And the idea isn't just to draw the indigent. Saggar and Walker are certain that they can draw from the big pool of people who live and work near downtown — both north city residents and affluent office workers.

"There's so many people who work down here who have insurance," Walker notes. "That what makes it affordable to be able to pull in people on Medicaid, Medicare and even non-payers. You've got to have a good enough payer base that you can be viable."

Still, Saggar adds, "Our goal is to serve the community." The two see the micro-hospital as a non-profit, with a board of directors that brings in two or three other experts.

As for Schnaare, who researched the idea while working on the design, he thinks the time might be right for St. Louis.

"The idea is to put hospitals in communities as opposed to having people drive to them," he says. The Lawrence Group's renderings show five stories, 80,000 square feet and room for about 100 employees.

"One of the things we really wanted was a multi-story building to fit into the dense urban area downtown," he says, "as opposed to the two stories you'd see in a suburban or rural area."