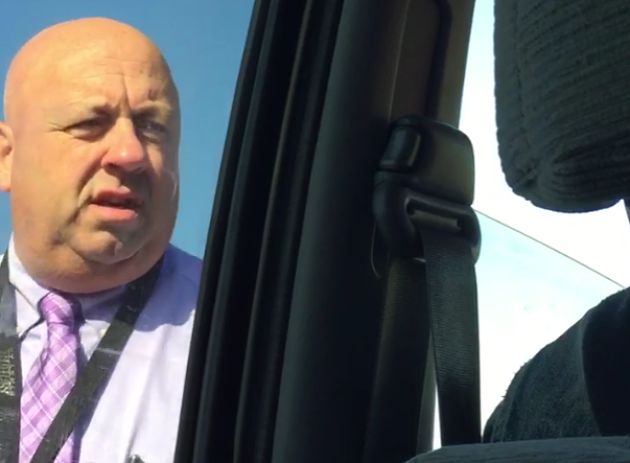 A police officer heard berating a St. Louis man for honking his car horn in a now-viral video has been identified as Detective Steve Burle — an investigator with St. Louis' Force Investigation Unit.

According to computer programmer Scott Smith, Burle was stopped in his unmarked police car at a green light at the intersection of South 12th Street and Geyer last week when Smith honked his horn to get him to start moving. Burle responded by pulling Smith over and, as heard in video recorded by Smith, calling him a "fucking jackoff" and threatening to "tow your car and lock you up," among other things.

"The Department holds its employees to the highest standards, therefore, we take any allegation of officer misconduct seriously," she writes. "At this point, it would be premature for the Department to comment on an ongoing investigation before it concludes."


The Force Investigation Unit was established in September 2014, in the wake of widespread unrest in Ferguson following the killing of Michael Brown by then-Ferguson police officer Darren Wilson. It is tasked with investigating whenever St. Louis police officers use deadly force — if an officer kills or wounds someone with a gun, the FIU investigates whether or not it was a legal shoot. The team consists of four detectives, including Burle, under the supervision of Sgt. Roger Engelhardt.

Last week's stop isn't the first time Burle has come under scrutiny. Last year, a man arrested after a May 2012 Occupy protest in downtown St. Louis filed a lawsuit against the St. Louis police, alleging that a detective had attacked him while he was in custody, breaking his nose.

In the suit, Scott O'Rourke alleges that Detective David King punched him in the face in the station's interrogation room when O'Rourke provided a P.O. box as his address. (O'Rourke was charged with a litany of felonies; a jury ultimately acquitted him on all charges.)

Burle was also in the room the day King punched O'Rourke. The suit alleges he watched it happen without intervening or rendering aid.

King and Burle both admitted in court that King had punched O'Rourke — but they claimed that O'Rourke swung on the officer first, using his right hand.

The lawsuit, filed by non-profit ArchCity Defenders, notes that Burle was sued twice before for use of force.

In 2008, Burle and other officers were sued after an incident in which they allegedly entered a home without a warrant and then tased the suspect and punched him in the head. The city later filed criminal charges against the man, but he was found not guilty on all counts. The civil suit against the officers was settled in 2011.

Finally, Burle was named in a 2006 case in which officers allegedly beat a suspect."There, much like the events described herein, Defendant Burle stood by and watched while his fellow officers unlawfully arrested, strangled and beat the plaintiff for over an hour," the suit alleges. The case was settled in 2008.

Burle's name also came up in a St. Louis American report in July 2016 that a city officer had shared a post on Facebook saying that Michael Brown's mother, Lezley McSpadden, was invited to speak at the DNC Convention. "Why not let them speak. It is the Democratic Criminal Party. How fitting," Lt. Jerry Foster wrote. A number of racist and offensive comments were made in response to the original post, including one that cost Fox 2 reporter Bobby Hughes his job. Burle reportedly "liked" the post.

The original post was condemned by the Ethical Society of Police, which represents minority officers in the city.

Circuit Attorney Kim Gardner has expressed recent doubts about the Force Investigation Unit, telling the Post-Dispatch in early October that she would prefer to have an independent team of investigators that report to her office for all matters related to police shootings. Gardner claims the Force Investigation Unit has intentionally withheld evidence in as many as 25 police shooting cases, including more than a dozen this year.

The unit's supervisor pushed back against those claims, saying the delay is due to the departure of prosecutor Cynthia Copeland, who previously handled police shootings.

In any case, Gardener says that the process for handling police shootings, as it presently stands, "is not working."

“It is no longer acceptable for police to be investigating themselves,” Gardner says.

"I’ve become convinced," she wrote, "due to the Stockley case and others, that the SLMPD cannot investigate itself effectively."