St. Louis Man Ticketed After Honking at Cop Stopped at a Green Light 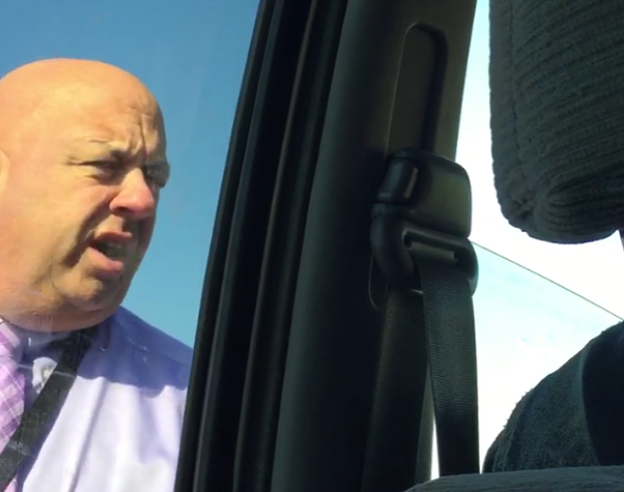 In a scene that is literally a plot point from an episode of the new season of Curb Your Enthusiasm, a St. Louis man claims he was ticketed on Friday afternoon after honking at a police officer who was stopped at a green light.

Scott Smith and two co-workers were returning to work downtown from lunch at Peacemaker Lobster & Crab when they were stopped at a red light at the intersection of South 12th Street and Geyer. When the light turned green, Smith says, the vehicle in front of them — an unmarked police car, as it turns out — failed to move.

"The light turned green and the car in front of me just sat there," Smith says. "So I honked once and he started to scoot forward, then just like hit his brakes real hard. So I honked again and he started to go forward and kinda threw his arms up, but wasn't really moving, still just blocking the way. So then I just laid on the horn for a minute as he slowly crept forward, and then right as he got through the intersection he kinda pulled into the far left lane of Tucker."

Smith says he was not yet aware that the person in the car was a police officer. But after the car pulled over and Smith was able to pass, the officer pulled right behind him and turned on his lights.

At that point, Smith pulled out his phone and began recording, setting it on his dashboard. It is clear from the audio that the officer is upset.


"Seriously?" Smith inquires as the officer approaches his car.

"Seriously," the officer replies angrily. "Is your horn stuck?"

"Is your brake stuck?" Smith shoots back.

"Is your fucking horn stuck, smartass?" the officer repeats forcefully. The officer then demands to see Smith's driver's license.

"For what, honking?" Smith asks.

"I tell you what, you're gonna either show me your driver's license or you're gonna wind up getting a ticket, I'll tow your car and lock you up," the officer says.

When Smith presses, asking what he has been pulled over for, the officer simply says, "You're being stopped for a traffic violation."

Smith protests, calling the situation "fucking ridiculous." The officer, who was the first of the two of them to use profanity, takes issue with the statement.

"I said this is fucking ridiculous," Smith repeats.

"Well you know what? Maybe you shouldn't be a fucking asshole," the officer responds.

Smith points out that the officer was just sitting at a green light, and Smith was simply trying to get back to work.

"I hope you're not in a hurry because you're gonna be delayed for a little while, fucking jackoff," is the officer's response.

The video cuts off at this point as the officer goes back to his car. Smith says when the officer returned, he asked to see Smith's insurance information, which was on his phone, so Smith had to stop the recording.

Soon a second unmarked police car arrived on the scene, with two more plainclothes cops showing up. Smith says he could overhear part of their conversation, in which the first officer again described Smith as a "smartass." Smith says the officers spent several minutes discussing the situation while standing behind his car.

"You could tell he was just trying to find something wrong — he wanted a reason to be able to do something, ticket, get me out of the car," Smith says.

Eventually a third cop car arrived — this one clearly marked as a city police vehicle. The officers who were already on the scene spoke with the newly arrived officer.

After about 45 total minutes of being pulled over on the side of the road, the original officer approached Smith's car again and explained that Smith would be getting a ticket in the mail — the printer that prints tickets in the city officer's vehicle is broken.

Smith says he still was not told what the ticket would be for — during one heated exchange the officer had mentioned something about "excessive noise" coming from his vehicle, but Smith says he was never definitively told what he was charged with.

Schron Jackson, a spokeswoman for the St. Louis Metropolitan Police Department, responded to our questions about the stop by telling RFT that Smith should contact the department's Internal Affairs division (and providing their phone number). She did not comment further.

In any case, Smith feels the officer was deliberately punishing him by making him late to work — all for daring to honk his horn.

"A traffic violation shouldn't end up with 40 minutes on the side of the road with you being an angry prick yelling at me through the window," Smith says. "If I violated some violation, just give me my ticket and send me on my way.

"I really was on my way back to work," Smith continues. "I was already late; I had two co-workers with me. It was just like, 'Dude, whoever you are, just get the hell out of the way. Quit being an asshole just because I honked at you.'"

The officer has been IDed as a member of the city's Force Investigative Unit, formed in the wake of Michael Brown's shooting to probe officer-involved shootings. He also has a record of being sued for standing by while other cops manhandle suspects. See the latest here.