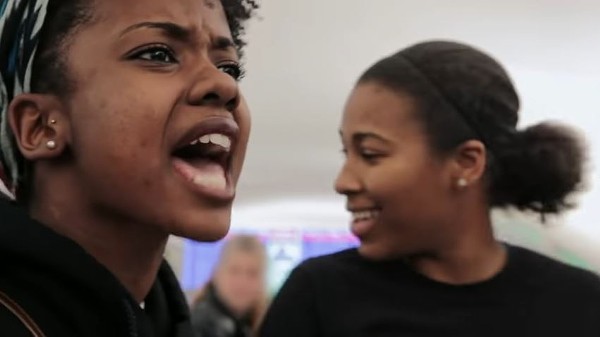 Ferguson activist Alexis Templeton, whom county prosecutors had accused of assaulting a motorist during a 2015 protest on I-70, has agreed to a plea deal that will avoid jail time.

Templeton, 23, pleaded guilty to the charges earlier this week, the Post-Dispatch reported, in exchange for two years of probation and 120 hours of community service, as well as fines.

If she completes the requirements, the conviction goes away.

Templeton had been charged with third-degree assault, first-degree trespassing and disturbing the peace after the protest, which shut down I-70 in August 2015, the anniversary of the death of Michael Brown.

St. Louis County Prosecuting Attorney Bob McCulloch alleged that Templeton, who was one of the protest organizers, punched a driver who attempted to drive past the block. McCulloch alleged in a press release at the time that the driver suffered an eye injury.

The RFT's Danny Wicentowski, who was on the scene, captured photos showing a confrontation with a driver, but they did not show any punches thrown — much less an injury. Templeton's lawyer, Grant Boyd, told the Post-Dispatch that his client pleaded guilty to avoid jail time and any possibility of losing her scholarship at Washington University.

The two young activists were the subject of the documentary Show Me Democracy, which aired on Fuse.