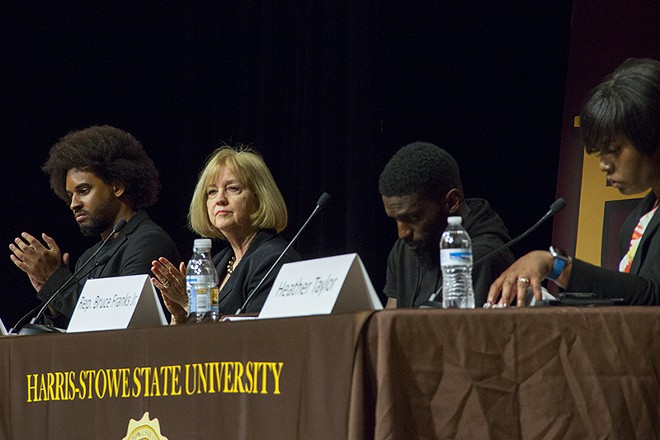 Last week, as a crowd of protesters milled about on the sidewalk outside St. Louis Mayor Lyda Krewson's home in the Central West End, the familiar protest chants momentarily gave way to shouts of "Fuck Prop P!" — a reference to the ballot measure to be decided by city voters on November 7.

For opponents of the measure — a half-cent sales tax that would raise $19 million annually in revenue, about $13 million of which would go toward police compensation — the issue is nothing less than a referendum on the department, its leadership and the certainty that kettling and pepper-spraying people during mass arrests isn't a great example of police work.

But for Krewson, the referendum is anything but symbolic, and in an interview with Riverfront Times, the mayor pushed back on the argument that the measure represents weak medicine for the city's policing failures.

Those criticisms, she says, ignore the tangible challenges facing a chronically understaffed department that's relied too long on overtime to make ends meet. That's particularly true now that voters in St. Louis County have passed their own Prop P — yes, the two measures are identically named — which will increase county police salaries by about 30 percent.

"The pay disparity is something that is, for one, not fair," Krewson says. By next year, a rookie St. Louis County cop can expect to earn about $52,000 in salary. A new city cop, by comparison, currently makes about $42,000. Passing the city's Prop P would raise metro officers' salaries by around $6,000 and add $4,000 annually to their benefits. ;(The raise would also increase firefighter salaries.)

Krewson concedes that without the county's pay raise on the horizon, the pressure on the city to act "would not be the same." Still, she notes that pay disparities among the region's various police departments have been a problem for years.

With the passage of the county's police pay increase, "it immediately turns the pay dynamics on its head," she says. And in the face of opponents who want to send the police department a message, the mayor points out that the pay disparity is "untenable if you’re trying to run a good department and keep and attract good officers."

This line of reasoning — that raising police salaries is the best way to hire good officers and ensure we keep the good ones we already have — forms the backbone of the pro-Prop P argument, though supporters have offered little in the way of data to back it up.

And while fears about a "dire shortage" of city officers appear overblown, officers are certainly paying attention to their paychecks.

The St. Louis Police Officers' Association, which acts a union for around 1,100 city officers during collective bargaining with the city, backs Prop P and estimates that 100 of its members have applied to county positions. An in-house survey of 300 members conducted over the summer reportedly found 70 percent considering changing jobs.

Also supporting the measure is the Ethical Society of Police, which doesn't function as a union in contract negotiations, but does aim to represent the department's black officers. ESOP's president, Sgt. Heather Taylor, is frequently critical of the department, but last week she penned an impassioned defense of Prop P, noting that low pay is driving more and more of the city's black officers to other departments or out of police work entirely.

The question of accountability has also proven a sticky subject. Opponents point to Comptroller Darlene Green's audit of police overtime payments, which found that hundreds of thousands of hours could not be verified. A coalition of protest organizers, civic activists and some city officials are collecting signatures to trigger a state audit of the police department, a step they say is necessary before any consideration of raising police pay.

As for Krewson, she says she would not "object to a state audit." She says that she looks forward to seeing an update to Green's overtime audit "in the near future."

Krewson acknowledges concerns about the department's handling of money in the past, and she notes that the public safety focus of Prop P is laid out in iron-clad terms in the board bill that put the resolution on the ballot. To Krewson, that means voters don't need to worry that the city will shift public safety money to other needs, an issue that's caused no small amount of consternation in the county.

It's not all about police salary increases. Passing Prop P would automatically increase the city's business-use tax, raising $4 million that Krewson has promised will go towards fulfilling a broader definition of public safety, one that encompass mental health services, vacant building demolition and summer jobs programs. Those funding areas, says Krewson, "are not afterthoughts, they are integral" to the measure's overall purpose.

With next Tuesday's vote fast approaching, the campaign for Prop P is in full swing. A TV ad had has begun airing in local markets, and supporters are ramping up their pleas for votes.

Notably, Prop P notched the endorsement of the St. Louis Post Dispatch editorial board, which last week called the measure the "best way to stop abuses and improve police performance," while arguing that protesters are deploying "misguided" logic in trying to block pay raises to police.

Prop P's opponents, meanwhile, have vowed to canvass against the resolution, setting up a showdown of perspectives that leaves little room for common ground. On one side, Prop P is a taxpayer-funded reward doled out in the shadow of documented police abuse; on the other, it's the only thing stopping the police department from becoming much worse.

Krewson acknowledges the divisiveness of the issue.

"We won't always have all the votes," she says when asked about activists mobilizing against the ballot measure. "I hear what they’re saying, but I think that voting no on Prop P is not the way to get better training. How many officers will we be short next year at this time if we vote no on Prop P? It’s not a way to get a safer city."