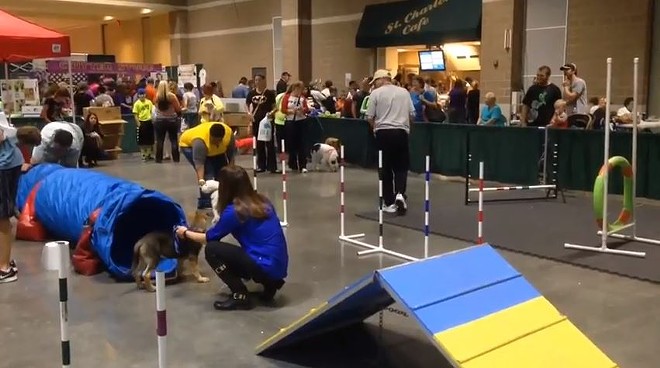 The cancellation of the St. Louis Pet Expo this weekend poses a steep disappointment to an expected 20,000+ animal lovers and 175 vendors. Yet while the St. Charles Convention Center claims it axed the event due to "unmet contractual obligations," the expo's St. Louis-based organizers say the blame lies with a disgruntled employee — one who apparently believes she is "a prophet tasked with writing a new book of the Bible" and "Moses reincarnated."

The claim comes courtesy of a lengthy statement posted to the Amazing Pet Expo website, in which the company details an absolutely bizarre series of events involving an unnamed accountant hired late last year to clean up its bookkeeping.

"At first, it seemed like the best decision we could have made," the statement reads. That perception changed when the accountant's daughter allegedly provided Pet Expo owners with recordings of her mother in the midst of a Book-of-Revelations-style rant.


She had come to believe she was a prophet tasked with writing a new book of the Bible, was Moses reincarnated, and that the COO of our company was the anti-Christ. She had been timing all of the COO’s actions and claimed they all took place in increments of six seconds, six minutes, six hours, etc, thereby confirming he was indeed Satan. ... in the most chilling portion of the recording, [she] stated she needed to kill the COO/Satan.

When COO William Rilenge confronted the accountant, the statement alleges, she physically attacked him, had to be removed from the building by security and was subsequently arrested.

The Pet Expo statement also includes documents from a restraining order — with the name of the order's target redacted — apparently filed against the accountant and signed by a judge on April 20.

St. Louis' Pet Expo debuted in 2009, and its organizers later took the show on the road throughout the nation. The company continues to be based here.

The organizers promise that they'll be bringing the local event back soon, although details are not yet clear. In a separate statement, the company said, "The good news is that we have found an alternative location to hold the event in early November. We are still working to finalize all of the details and once we have that information, we will release this to everyone."

However, the company's statements leave many unanswered questions. Amid all the material, there's precious little information about how, exactly, the accountant's harassment and religious mania resulted in cancelled events across the country, or how her actions factored into the "unmet contractual obligations" referenced by the St. Charles Convention Center.

It's also unclear why the company waited until last week to notify its vendors of any problems. As recently as October 20, the St. Louis Pet Expo Facebook account indicated that the event was still on, posting, "Our intent is not to cancel the event, and our attorney is working now to resolve the situation."

A spokesman for the St. Charles Convention Center declined to elaborate on the dispute.

In the meantime, the confusion has produced plenty of bad blood. Vendors across the country are out potential profits and now seeking refunds. Some vendors have gone to the press to accuse Amazing Pet Expo of running a scam, an allegation the company denies.

And that brings us back to another point nestled the company's statement, which doesn't solely deal with the accountant troubles. Under the header, "What Are We Doing?" the statement indicates that the company is more than willing to sue to defend its good name:

We are also fighting back legally against the few organizations and vendors who are illegally contacting our vendors, other exhibitors, venues and others in an attempt to disrupt daily business without asking for or considering the facts contained in this statement. These actions have been painful for our staff and also impacted many vendors, but we are committed to fight back and to regain the trust of many of our longtime vendors and partners.


Indeed, the company has had its lawyer threaten at least one vendor for publicly griping about a cancelled event. As reported by Patch.com — in a story goes into greater detail about Amazing Pet Expo's cancellations around the country — a Vancouver-based non-profit received a cease-and-desist letter from the company's lawyer.

The lawyer's letter reportedly accused the non-profit's owner of posting "false and defamatory statements about APE in various social media," actions that "constitute tortious interference with APE’s contractual relations with its vendors and exhibitors, again resulting in significant damages for which you will be held liable."

When the RFT reached out Amazing Pet Expo, its president, Sheila Rilenge, responded late Wednesday night that she'd be happy to help. However, she then failed to respond to our detailed questions. She reached out just before deadline Thursday evening, but wasn't available during the window we offered for a phone interview — and, by press time, hadn't taken us up on our offer to provide a written statement. (We'll update this post if we hear back.)

Still, in yet another press release the company published this week, Rilenge stated that although "[i]t has been difficult on our entire staff, especially those that have been discriminated against," she believes that the recent controversies "have made us a stronger team, and our exhibitors, even for the shows we had to cancel or reschedule, have stood by us."