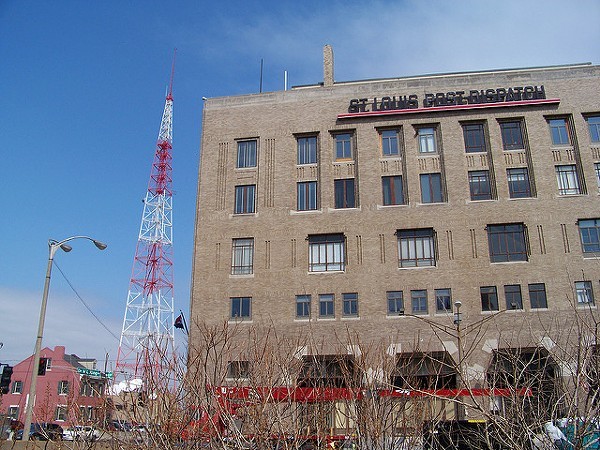 Protests against police brutality in St. Louis are now in their sixth week. A sales tax to give raises to city cops is on the ballot in less than two weeks. Tower Tee could become townhouses. A serial washing-machine pooper is terrorizing students at SIU-Cardondale.

Yet in these increasingly troubled times, St. Louis Post-Dispatch Editorial Page Editor Tod Robberson turned his attention to a surprising target: His own paper's reporters.

In a column published online last night that reads more like an internal memo than a grievance to be aired publicly, Robberson chastised reporters for criticizing his department's work on Twitter.


... I’ve seen some social media posts by Post-Dispatch journalists criticizing certain editorials, suggesting we on the opinion side haven’t been tough enough on, say, a local business or of police conduct during recent protests.

Reporters and editors have no license to opine on social media, and the paper’s written policies make this clear. Lots of people in the news-consuming public are constantly searching for signs of bias. Journalists must never give them ammunition. Readers must always be assured that the information they receive from our reporting staff is as close to the unvarnished truth as reporters can get it.

Basically: I'm the one with the opinions, guys. The rest of you, shut up.

The broadside went over about as well as you'd expect in the newsroom, where Robberson was a major source of frustration among the writers even before yesterday's call-out.

Robberson's predecessor in the editorial page editor's job, columnist Tony Messenger, called him out last night on, yes, Twitter — arguing that Robberson can hardly seek to enforce a division between the news and editorial wings if he's going to lecture the news team:

When the editorial page editor lectures the newsroom isn't that the opposite of news vs. editorial division? https://t.co/IxLC9Lerop


Suffice it to say, if retweets equal endorsements, Messenger was not alone in his response.

Robberson took over the editorial page editor's duties in January 2016. But unlike his predecessor, Messenger, who made his bones as a reporter (and one with some huge local scoops) before crossing to the opinion side, Robberson was an outsider by way of Dallas.

And all too often, under Robberson's guidance, writers believe the editorial board has been willing to undermine their work. From a Robberson column that dissed a restaurant already praised by the restaurant critic (and the national press) to a recent unsigned editorial that knocked the paper's own front-page story as "lame," they believe he's been too quick to dismiss findings that their colleagues have arrived at after careful reporting or observation.

This latest column has only thrown gasoline on the fire.

No less than the future of journalism is at stake, he argues.

"When the wall breaks down between news and opinion, the integrity of our entire news product suffers," Robberson writes.


The few journalists, including photographers, who have been bold enough to approach me with their own opinions have received a quick and firm response: Careful, you’re crossing the line.

We are all fighting for the survival of our profession, and it’s essential that no one undermines this effort by allowing the disciplined division of news-vs.-opinion to weaken.

As the editor in chief of a paper that allows writers to freely acknowledge their biases — and even urges them to weave their personal history into their narrative when it's relevant — I've got a much different take than Robberson.

To me, reporters having opinions isn't nearly so big a threat to journalism as daily newspapers' foolish insistence that 99 percent of its writers not have them. We can't help but see the world through the lens of our experience, and for me, a paper that acknowledges its writers are real human beings with different perspectives is far more honest than one that expects them to be automatons.

Should we allow ourselves to be dominated by our biases? Of course not. I want my writers to get to the bottom of things, not just bloviate based on what they think they know. But I fully expect them to come into a story with opinions and, once they've dug deeply into a matter, to leave with even more (ideally, different ones — research often has that effect).

If newspapers like the Post-Dispatch were being honest, they'd admit as much. Of course its reporters are making just as many choices as the writers on my staff: what to cover, who to call for comment, how to frame the information they're given. The only difference is that at the P-D, they're forced to feign neutrality: It's not their take; it's the One True Take, and there can be no other.

Really, you start to see why the old fogeys who dominated mainstream media in the late 20th century hate social media so much — it makes it impossible to pretend there is only one way of telling a story, that the version written by some middle-aged white dude is the purely objective one. Online, other people can tell it their way — and earn big followings by pushing back and adding the inconvenient facts the old-school gatekeepers would rather leave out.

Reading between the lines, I think Robberson's real problem isn't that reporters are sharing opinions; it's that they disagree with his opinions. If a Post-Dispatch reporter tweeted "Bravo" and included a link to his column taking on racist shock jock Bob Romanik, would he really be invoking the Death of Journalism? Seems unlikely. Note that he doesn't just want them to stop pushing back on Twitter; he also doesn't want them stopping by to share their insights on the stories they're covering. Apparently colleagues providing information about something they've spent months covering might crumble the paper's very foundations. Someone in the field might have analysis to share after months of reporting? The horror!

But looking past the Gotterdammerung that Robberson seems determined to invoke, I can't help but marvel at the oh-so-public nature of his screed against his colleagues. If your coworker criticizes you in a tweet that might be seen by a few thousand people at most, is the best reaction really to pour out the paper's ink by the barrel to denounce them?

Surely there are more important things in St. Louis to inveigh against. And if Robberson isn't interested in the cops, or the intramural warfare among protest factions, or the sad fate awaiting Tower Tee, why not come out against the washing-machine pooper? Seems like that's one we could all applaud — even his own newsroom.