Journalists Are Sick of Getting Arrested in St. Louis 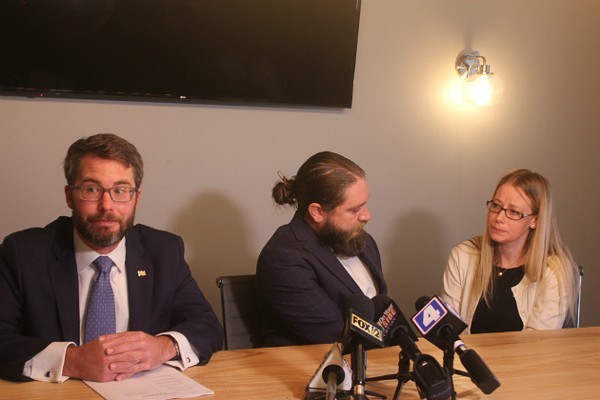 A bevy of national journalism organizations have co-signed a letter to Mayor Lyda Krewson expressing their "concern" about just how many journalists have been arrested in St. Louis in the last six weeks.

For those keeping score, the number is ten — and of those ten, six have alleged the use of excessive force. Five say they were pepper sprayed. One, Mike Faulk of the St. Louis Post-Dispatch, was allegedly knocked to the ground and had his head pushed into the pavement in addition to being pepper sprayed. Another, Kansas City documentary filmmaker Drew Burbridge, also alleges he was beaten to the point he lost consciousness.

Another, freelancer Daniel Shular, who has contributed to the Riverfront Times, was detained for eighteen hours after his arrest.

That's even though almost all of the writers and photographers were wearing press credentials — and identified themselves as observers, not participants.

"All of the journalists arrested or assaulted were doing their job — one that often brings them to the scene of protests and law enforcement operations for the vital role of documenting these events for the public," notes the Committee to Protect Journalists in its letter, which was released last night.

The letter was co-signed by the leaders of a host of media advocacy groups, including the American Society of News Editors, the National Press Photographers Association, the Society of Environmental Journalists and the Radio Television Digital News Association.

The letter notes that press freedom groups have contacted prosecutors to urge them not to press charges against the journalists. They've been told only that charges are "under advisement" and that prosecutors have a year to decide whether to proceed.

"Journalists should not have to fear for their physical well-being at the hands of law enforcement when they cover newsworthy events," the letter continues. "We ask you to conduct a thorough examination of cases in which reporters were assaulted or arrested and discipline individual officers found to have behaved unacceptably. We hope the investigation will also spur proactive steps, such as increased training for police officers and clear, enforced policies on how to deal with the press during protests."

See also: Filmmaker at Protest Was Beaten by Cops After Arrest for Kettling, Suit Says