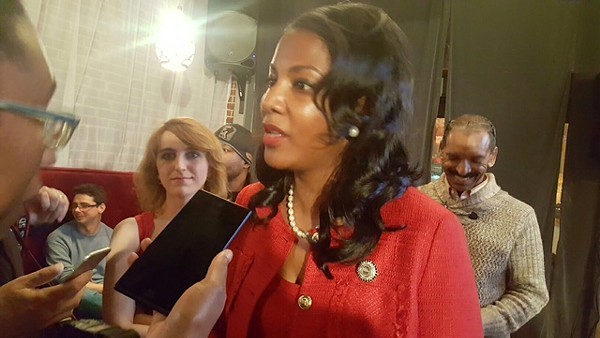 City voters are being asked to weigh another sales tax increase on the November 7 ballot — the second one this year. Proposition P, a half-cent sales tax increase, would go predominantly to raises for St. Louis police.

This morning, a broad coalition of progressive groups gathered at City Hall to ask voters to just say no. Groups that have been leading protests were well represented, as were faith groups and even some prominent elected officials.

"At times like these, when our people are in the streets demanding justice, asking us to increase taxes is tone deaf," City Treasurer Tishaura Jones says. "The government should work for the people, not the other way around."

Alderwoman Megan Ellyia Green, of the 15th Ward, voted against putting Prop P on the ballot, saying it would make St. Louis's sales tax one of the highest in the nation if it passes.

"In my opinion this bill should have never passed the Board of Alderman," Green says. "We put a sales tax on the ballot last April, and now we're asking the most poor, most vulnerable people in our community to once again raise their taxes. We're at a point where people who are under the poverty line are spending almost ten percent of their income on taxes, over five percent of that on sales taxes as well."

The push for another sales tax increase comes after St. Louis County voted in April to increase its officers' pay 30 percent. The union representing police officers has said that city officers will flock to the county for better pay.

State Representative Bruce Franks (D-St. Louis), who has been a leader in the protests that followed former officer Jason Stockley's acquittal, says it's more important to demand accountability from the St. Louis Metropolitan Police Department than to give its members a raise.

Last month, some of the same leaders at today's press conference announced an effort to force an audit of the police department. The city hasn't audited the public safety department since gaining control of the police department from the state in 2013. When Comptroller Darlene Green audited police overtime last spring, she found that hundreds of thousands of hours could not be verified.

Audit STL has been collecting signatures to trigger a state audit. Treasurer Matthew Carroll-Schmidt says members have about 1,500 signatures of the 10,000 they are aiming to collect in the next year.

"The current mayor campaigned on this," Carroll-Schmidt says. "She campaigned as a CPA who is going to come in and audit the city, save money and not raise our taxes. Less than a year in, she's breaking this vow and asking us to raise taxes on the poorest, and it just doesn't make any sense to us. Let's audit the city." 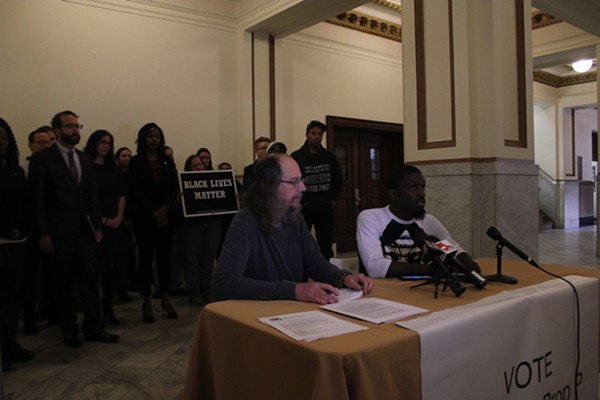 Alderwoman Green worked with Audit STL on their proposal for state Auditor Nicole Galloway to audit the city.

"Let's get a full audit of the city," Green says. "Let's understand where our money is going toward. Let's see how much money that is supposed to be going toward things like affordable housing and public health are getting diverted into a criminal justice system right now. And then let's come back and revisit this conversation after we have a full accounting of where our money is going to in the City of St. Louis."

"People are at their breaking point and we cannot afford to put more money into an arrest and incarcerate system without any accountability," Green says.