The day of the breakthrough that would eventually make her the first American woman to win a Nobel Prize in science, Gerty Cori reportedly ran down the halls of her Washington University laboratory, shouting to her husband, the chemist Carl Cori, "Carly, Carly, it’s glucose-1-phosphate!'"

Brilliant chemists of the early 20th century, the Coris used their Washington University laboratory to unpack the ways that muscles and the liver work to metabolize sugar — all the while contending with a scientific establishment that tried pretty much everything to keep her out of the lab.

Fittingly, St. Louis' first female mayor got the chance this week to honor the pioneering couple, establishing October 23 as Gerty and Carl Cori Day.
The honor was also extended by the state of Missouri and the suburb of Glendale, where the couple made their home.

It was 70 years ago on October 23 that Gerty and Carl got the news that they'd jointly won the Nobel Prize in Physiology or Medicine, "for their discovery of the course of the catalytic conversion of glycogen." On Monday — the first-ever Gerty and Carl Cori Day — a delegation including Gerty and Carl's granddaughter and two Washington University researchers chatted with Mayor Krewson and took photos to commemorate the two chemists.

Gerty and Carl were both born in Prague in 1896, where they began their long collaboration as medical students. In 1922, the couple immigrated to the U.S. and landed at a research institution in Buffalo — where they were told that working together would violate nepotism rules. They worked together anyway.

That was hardly the only time the husband-and-wife team ran into obstacles. A lengthy Washington University retrospective published in 2016 noted that, according to historical accounts at the time, "Cornell University, the University of Toronto and the University of Rochester all offered Carl jobs but refused to hire Gerty. ... At Rochester, someone reportedly pulled Gerty aside to tell her that her scientific ambitions were standing in the way of her husband’s career."

Ultimately, in 1931, Washington University offered jobs to them both, though only Carl was given a professorship. Despite her direct role in research, Gerty was made a research assistant, a title she held for the next fifteen years. It was just one year before their Nobel win, in 1946, that she was finally made a professor.

"They were at the forefront of this idea that you could take tissues and cells and break it down into chemical reactions," says Washington University professor Phyllis Hanson, who holds one of two endowed professorships established in the couple's names.

The Coris' legacy lives on not just in textbooks, but in a lineage of students as well, says Hanson.

"Six people from their lab went on to get the Nobel prizes, all doing this kind of reductionist biology," Hanson says. "They were able to take more complicated things and break them down to the purified components that actually make it work."

The Coris' discovery also formed the base of later work into treating diabetes, a disease that impairs the body's ability to regulate its own glucose levels. Their work, says Washington University professor Colin Nichols, represents "the fundamental background by which we understand how metabolism works and how sugar is broken down."

While the couple's scientific achievements gained renown, Gerty also holds a unique place in the history of women in science. She would likely recognize the challenges that still confront female scientists in laboratories and classrooms today, including those at the very university where she did her research.

Of course, those dynamics go beyond science, a fact not lost on Krewson. During yesterday's photo-op, she listened as the professors related the details of the patriarchy-defying chemist's life and Nobel Prize triumph of 1947.

"Wow," Krewson remarked, "it doesn't seem like that long ago." 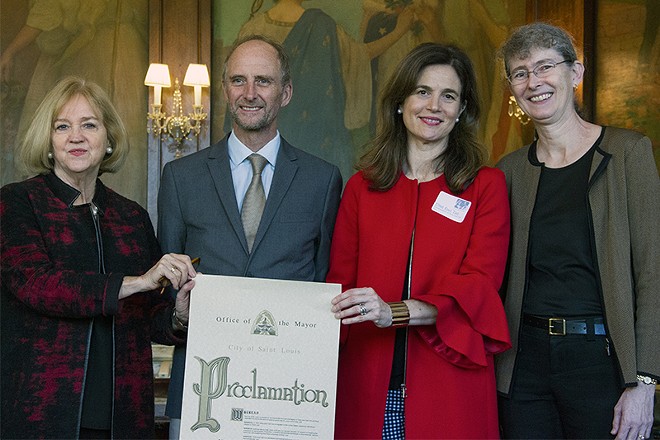