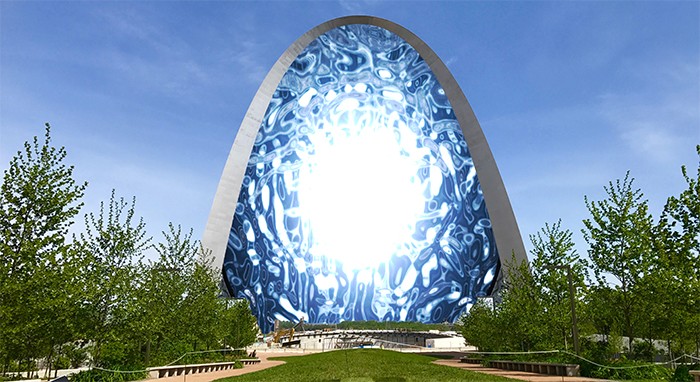 Governor Eric Greitens made a big futuristic splash yesterday when his office announced that a hypothetical Hyperloop would be included in the state of Missouri's bid for Amazon's second headquarters.

The proposal suggests that a big tube connecting St. Louis to Kansas City will surely convince Jeff Bezos and Co. that the Show Me State is the place for them. The tube would use magnets, somehow, to blast passengers at top speed from one side of the state to the other in about 30 minutes time. By taking this approach, Greitens is able to offer Amazon two cities for the price of one (and, notably, gets to walk the line between the desires of his state's two largest metropolitan areas without committing to either of them).

Oh yeah, and toss Columbia in there for free too, because wealthy technocrats surely love just hanging around on college campuses, right?

“We have not heard of anything that is quite frankly as bold and transformative as saying, 'Don’t just imagine one city, but imagine two cities and the third city in between — Columbia — and then imagine transforming that whole region,” Greitens' chief operating officer Drew Erdmann tells the Post-Dispatch. “We haven’t heard anything like that.”

It is bold. (Is "bold" the right word?) Especially considering the Hyperloop does not exist and would cost tens of billions of dollars to build — and our track record for transportation projects is, er, lacking, to say the least.

Take our highways, for example. I-70, which stretches along the same path the people tube would take, has a surface that could charitably be described as "cratered," and it's a fucking road.

Seriously, do we trust MoDot to build and maintain something that's going to launch people across the state in a windowless steel tube at "airline speed"? Before you answer, consider the fact that we're currently struggling to build a goddamn trolley line that's less than two miles long from end to end. Years behind schedule: three, and counting.

Don't get us wrong, we're all for the quickest possible route to the science fiction future we've been promised. (The first group of people off-planet are likely to be the boldest venture capitalists, looking for that great intergalactic deal. The quicker they leave, the better Earth will become.) We're just not convinced that Missouri is the most likely candidate to pull off a life-sized version of your bank's pneumatic tube system. Take a look at our state government — do any of those women-hating gun-fuckers look like progressive thinkers?

So instead of making grand promises of things we can never achieve, we need to look at the assets we already have — specifically, our half-constructed Stargate already perched along the Mississippi River.

The Arch is cool and all, but imagine how much cooler it would be if it was also able to create a stable artificial wormhole allowing near-instantaneous travel between two distant points. Fuck that half-hour locked in a tube; with Stargates set up all over the state Bezos could beam himself to Columbia in a matter of milliseconds, hit on some co-eds in Mizzou's quad, then off to KC to watch the Royals lose at baseball. Then kawoosh, home for dinner.

Stargates, also known as Astria Porta in Ancient and Chappa'ai in Goa'uld, have existed for millions of years — the one in Antarctica, for example, is estimated to be 50 million years old. They were constructed by the Ancients; it was their greatest achievement. Can we not simply reverse-engineer their work?

Now, we know what you're thinking: Wait, isn't Stargate a science fiction franchise? Isn't it a series of movies and television programs? Isn't the very idea that we could ever construct such a thing pure fantasy?

The answer to all of your questions is "yes" — but before you leave, we have one question for you, too:

Does this Hyperloop shit seriously sound any more plausible?