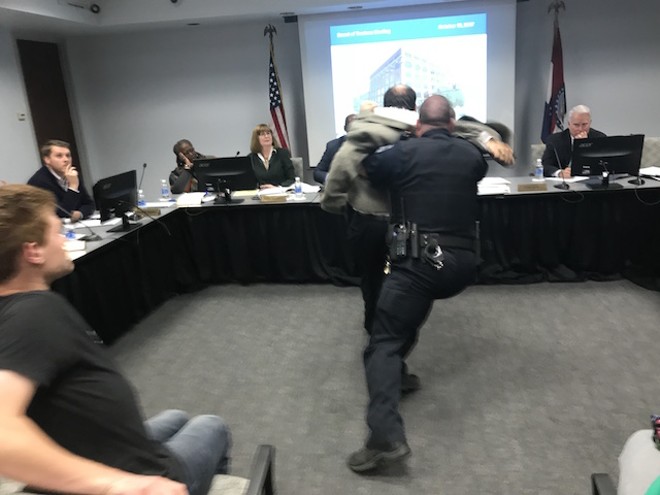 Steve Taylor, a St. Louis Community College adjunct instructor, came to the college district's board of trustee meeting last night with prepared remarks. He planned to highlight the award he'd gotten for excellence in teaching and his stellar reviews — and then talk about the troubling "culture of intimidation" he saw.

Instead, he was given further proof of it.

When Taylor, 53, stood up and began to object to rules that allowed people at the meeting to clap for administrators and other presenters, but not during the public comment portion, he was grabbed from behind by a police officer and thrown to the floor.

Update: Taylor has been fired by STLCC. See our October 23 update

Both he and a witness say he was given no warning and no chance to submit to handcuffs being before body slammed by the officer.

"He came up behind me, and I saw his left foot take my legs out from under me," says Taylor, who's taught math at the Wildwood campus for four years. "Then he full body slams me to the concrete floor and violently put my arm behind my back. I said, 'Sir, I am complying, I will go with you.'"

A spokeswoman for St. Louis Community College says that Taylor was given several warnings to leave the meeting, but that he instead "charged the table where board members and the chancellor, Dr. Jeff L. Pittman, were seated."

"College police responded by restraining the individual before he reached the table," the statement read.

But Taylor says what they describe as "charging" was merely his attempt to regain his balance after the officer violently pulled his jacket back. That's when he was instead taken to the ground.

The college also released this video of the fracas.

After Taylor was taken from the room, says fellow adjunct Brett Williams, not a single trustee addressed the incident.

"Everybody completely freaked out," he says of the audience. "There were students who witnessed this. The board did nothing. They just sat there stone-faced." When a student audibly objected to Taylor's treatment, Williams says, he was told to leave (and did, this time without the assistance of police officers).

For Williams, the situation is proof that something has gone wrong at the community college. An adjunct who teaches art at the Forest Park campus, he says that adjuncts voted to unionize three years ago. But negotiations have dragged on.

"They're stonewalling us at every pass," Williams says.

Williams and Taylor both serve on the contract negotiation committee, which led them to start attending board meetings.

In last month's meeting, Williams acknowledges, the public comment portion got a bit rowdy. Audience members clapped and applauded, and since there was no warning when speakers were close to the two-minute cut-off, some went a bit over.

Last night, the board implemented a 30-second warning. Board members also warned that anyone speaking out of turn would be asked to leave, the Meramec Montage reports, and that clapping for speakers would not be permitted.

After the first speaker in the public comment portion made her remarks, though, audience members applauded anyway. The board's vice chairman, Rodney Gee, announced that if anyone clapped, they'd be removed, Taylor says.

That didn't sit right with Taylor, who says he witnessed plenty of clapping during the previous portion of the meeting. He objected, walking down the aisle toward the board members with the idea of turning to address his fellow audience members.

"Why can we clap for administrators and not for other speakers?" he said. But before he could finish, a police officer came up behind him and grabbed him by the jacket. The next thing he knew, he says, he was face-first into the ground.

Taylor says he was permitted to go to the emergency room instead of being booked into jail after officers saw he had a mark on his face. He was having difficulty breathing, and paramedics were worried about a concussion.

But he was still issued two citations, he says: One for disturbing the peace and one for resisting arrest.

"There is," he says, "a problem with the culture at St. Louis Community College."

We received a statement from St. Louis Community College. We've included it in its entirety, and also update the earlier story to include reference to the college's response.

During the portion of the meeting reserved for public comment, an adjunct faculty member became disruptive and loudly voiced displeasure with Acting Chairman Rodney Gee’s instructions limiting the time allotted to each speaker and requesting that the audience refrain from applause or other response.

After several warnings to leave the meeting, the individual charged the table where board members and the chancellor, Dr. Jeff L. Pittman, were seated. College police responded by restraining the individual before he reached the table. The individual was subsequently arrested by St. Louis Metropolitan Police. Two other individuals were also escorted from the meeting when they became disruptive. Acting Chairman Gee restored order and public comments continued without incident.

The college provides an opportunity for members of the community to address the board at its public meetings, but reserves the right to limit the time allotted for remarks.

St. Louis Community College meetings are business meetings held in a public forum. However, disruptive outbursts undermine the process of conducting business in a transparent and respectful manner. We regret that our students and members of the public had to witness this action.

Update on October 23: Taylor confirmed to the RFT that he has been fired. See our latest story here.

Editor's note: We updated our story after publication to include a statement from the college. We also embedded the video after receiving it around 5 p.m.