Gateway Arch Shows Off Progress on Visitor Center and Museum 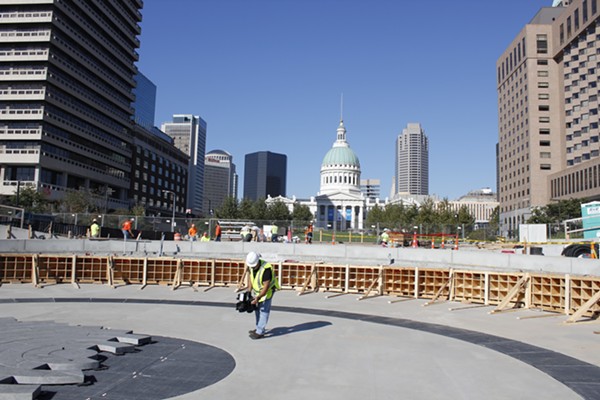 This morning, the Gateway Arch Park Foundation and the National Park Service provided a media tour of the renovations for the Arch's visitor center and museum. Work on the project is supposed to be complete in July 2018 — five years after construction began and nearly three years after the original deadline.

But today's tour shows just how much has changed. Even though renovations are still underway, workers have added a 46,000 square-foot multi-level addition and significantly reshaped the monument's connection to downtown St. Louis.

Rhonda Schier, chief of museum services with the National Parks Service and Ryan McClure, director of communications and activation at Gateway Arch Foundation, led the tour.

"We have literally connected the Arch to the city it represents," McClure says.

The new entrance to the visitor's center/museum will be between the legs of the Arch, facing the Old Courthouse. In front of that entrance will be a fountain for people outside the exhibit to enjoy.

You can see an artist's rendering below. Today, that fountain is still a construction site (see above). 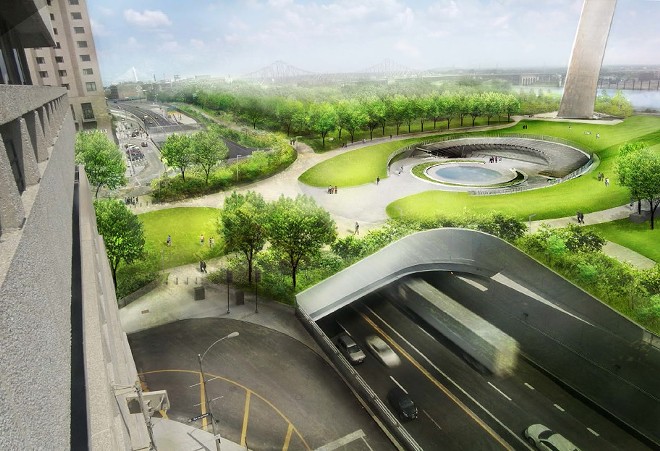 That isn't all that will change. In the old set-up, visitors could not enter any part of the building without going through security.

"With the new orientation, you can come in the lobby, get your ticket, use the restroom, get a drink of water before you go through security," McClure says.

From the glassed-in area (shown in an artists' rendering below), visitors will be able to look out at the Old Courthouse and the rest of downtown. 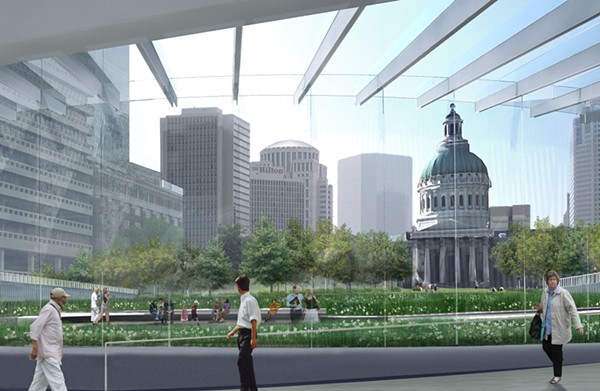 Today, the area remains under construction. You can see the skeleton of where things will be, but there's still plenty of work to be done.

"Under the mezzanine will be an education center," McClure says. "So there's a classroom right there. Again, something that has not existed in this facility before is a dedicated classroom. Field trips, school groups that are coming through will be able to use that room."

The lowest level of the museum is where the exhibits will be. Schier explained to the assembled group what visitors will see when they first walk in, with a series of interpretative hubs to draw them in.

Entrance to the museum will remain free.