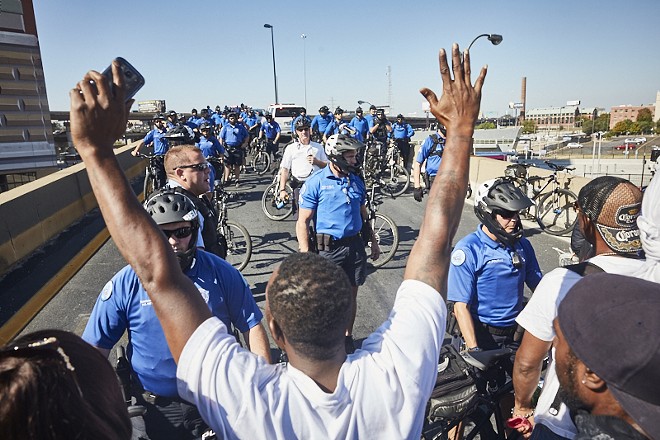 The family of Davion Mikael Henderson has filed a lawsuit against the St. Louis Metropolitan Police Department and two of its officers, saying their unlawful use of force led to his death earlier this year.

Henderson, 21, was killed on January 9, 2017, after a police chase that ended with a crash at Page Boulevard and North Taylor Avenue. Henderson was the front-seat passenger in a car that flipped over and onto its side on someone's front lawn.

At that point, the lawsuit alleges, officers Matthew Shaw and Willie Haymon approached the vehicle with their weapons drawn.


Defendant Shaw took a couple of steps alongside the roof of the Vehicle, reached the blacked-out sunroof, and immediately fired three (3) bullets into the sunroof.

Defendant Shaw was unable to identify or observe any of the occupants of the Vehicle because the blacked-out tinted sunroof provided zero visibility. Defendant Shaw’s bullets into the blacked-out tinted sunroof fatally struck Decedent in his right upper chest. The high-velocity bullet tracked from right to left, piercing Decedent’s lung, heart, diaphragm, liver, and stomach resting in Decedent’s left peritoneal cavity causing his immediate death.

After that, Shaw fired another three rounds: "After coming upon the front of the Vehicle’s windshield, Defendant Shaw immediately fired three additional bullets into Decedent’s body through the front windshield."

Why might that matter? As the Post-Dispatch reported the day after Henderson's death, the officers allege that they gave chase after realizing the vehicle was stolen — and, after they approached following the crash, that Henderson pointed a gun at them.

The lawsuit, however, argues that they'd have no way of even seeing that, since the sunroof Shaw initially fired into has zero visibility. That makes Shaw's use of force "unnecessary and punitive," the suit alleges.

The suit, filed by attorney Derrick R. Williams of Clayton, was filed on behalf of Camille Curtis, Henderson's mother. It alleges unlawful use of deadly force against Shaw and failure to instruct and train against the department as a whole.

"The SLMPD was on notice that Defendant Shaw has had numerous civil rights and excessive force complaints lodged against him," the lawsuit alleges.

St. Louis has undergone more than one month of near-daily protests after the acquittal of another officer accused of shooting a young black man. Jason Stockley was found not guilty on September 15 in the 2011 murder of Anthony Lamar Smith.

That case also resulted from a police chase followed by a deadly shooting.