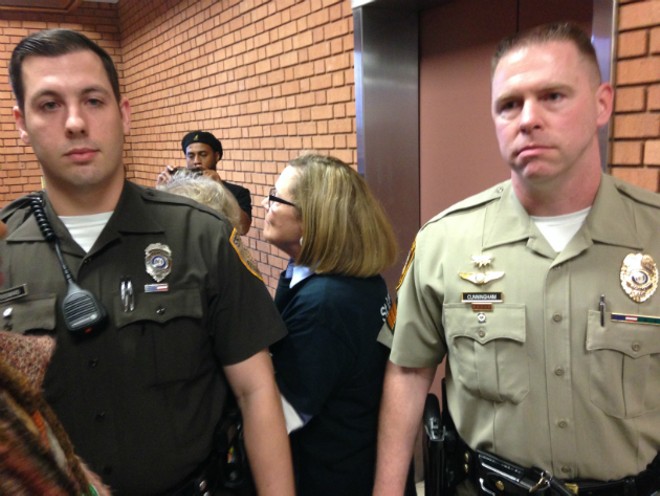 An inquiry into the mass arrests of protesters last month at the St. Louis Galleria was missing a few key speakers — police commanders.

St. Louis County Councilwoman Rochelle Walton Gray says County Police Chief Jon Belmar and Richmond Heights Police Chief Doug Schaeffler were asked to attend Tuesday's meeting of the Health and Justice Committee in hopes they would explain what happened at the mall that day. Neither man showed up.

Neither did St. Louis County Prosecuting Attorney Robert McCulloch or anyone from his office, despite his name being listed on the agenda.

Herbert Bernsen, director of the county Justice Services Department, also didn't come, though he sent a letter defending workers at the jail where arrested protesters were processed and held overnight. The jail went into lockdown, which drew criticism from some people trying to get medicine to loved ones.

"I am extremely proud of my staff's performance that day, especially in light of the sensitive issues involved," Bernsen wrote.

The only police supporter to show up physically and address committee members was a woman in a "We Support the Thin Blue Line" T-shirt, who traded insults with protesters in the audience, flipping the bird to a few before she got up to speak.

"I can't even think of more rude people than the people in this room," the woman, who gave her name only as "Pattie Ann," said after protesters laughed and interrupted her.

She later ended up in a shouting match with a number of people outside in the hallway. Officers separated the two camps and escorted the woman and a friend into the elevator.

Twenty-two people were arrested on September 23 at the Galleria in Richmond Heights. Protesters were in a second week of demonstrations following the acquittal of a white ex-St. Louis city cop accused of murdering a black suspect in a 2011 drug case, and they had made a point of targeting economic engines, such as the mall.

Police claim that mall management asked them to clear demonstrators out of the shopping center after a protester allegedly threw a trash can. (Video shows a person pick up a can that had been placed at the foot of an escalator and toss it over the rail.) Officers from the county and Richmond Heights were filmed tackling demonstrators during a mad scramble. An officer even grabbed one of the protesters outside in the parking lot, picked him up and body slammed him to the pavement, video shows.

Protesters and supporters say there was no cause for that kind of force.

"We know the protest was peaceful," state Rep. Stacey Newman told the committee. "We know there were no incidents leading up to the arrests."

Newman, who has called for an outside investigation, says witnesses have been consistent in saying an order to disperse shortly before the arrests was "unintelligible" to most in the crowd. And once people were transferred to jail at the Buzz Westfall Justice Center in Clayton, the problems continued, she said. Officers assigned to the jail used handcuffs to lock the front doors and kept people from posting bail or meeting with attorneys until the next day.

In his letter, Bernsen wrote that county officials decided to lock down the facility because a crowd had gathered outside.

"Suffice it to say, emotions were running high among the protesters," he wrote. "Many in the group identified themselves as family members, friends, and supporters of those who had been arrested at the Galleria demonstration, and loudly voiced opinions that were highly critical of the arrests and of law enforcement personnel."

That prompted safety concerns, so police locked down the center at about 1:30 p.m., he wrote. Some of the protesters locked inside weren't released until more than 24 hours later. Bernsen claimed that all the inmates were given medical attention and medications if required. But protesters said that those who got medicine had to wait hours and others were denied. At Tuesday's meeting, a woman who had been arrested said that corrections officers did nothing while she vomited and asked for her medicine.

Nathaniel Carroll of ArchCity Defenders was one of the attorneys trying to get access to the jailed protesters that Saturday and Sunday. He said that police officials should have been at the justice committee meeting, but he predicted they would show up later for a council meeting where police raises would be discussed.

He urged council members to hold them accountable.

"I have two children, and when they misbehave, I don't reward them," Carroll said. "I don't give them a raise, OK? I talk to them. I give them mental health training. I teach them empathy. I teach them when you hurt someone, you don't get rewarded for that."

Correction: This story was altered after publication to correct the statement on a police backer's shirt.