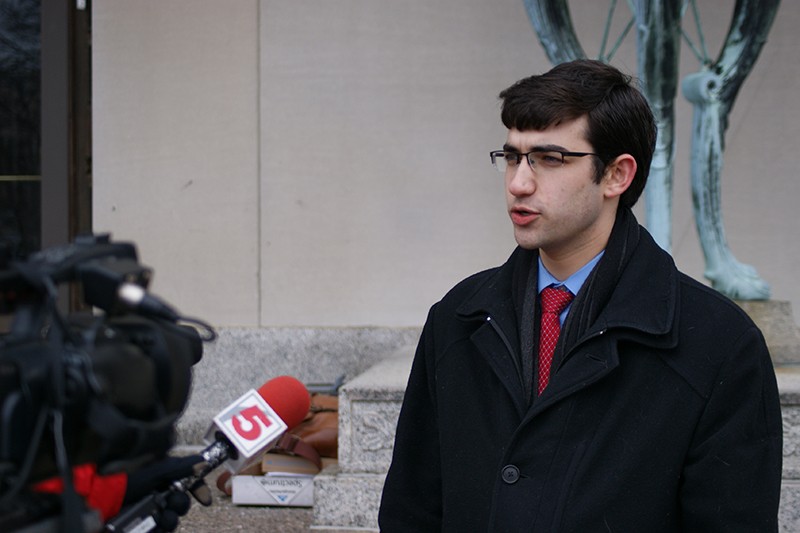 After two years and nine lawsuits, Aaron Malin's campaign to hold Missouri's drug task forces accountable to the state's Sunshine law is paying off. But now, for the first time since the former Show-Me Cannabis researcher began his lawsuit spree in 2014, the payoff actually comes with a dollar sign.

The ruling also comes with good news for the lawyers representing Malin in court — chiefly those from the ACLU of Missouri and the Freedom Center's David Roland: Richardson will also have to pay their attorney fees, though the amount has yet to be determined.

"Just because you're the elected prosecutor of Cole County doesn't mean you're above the law," says Malin in a phone interview from Colorado.

A Missouri native currently enrolled in law school in Denver, the activist began his campaign of "strategic litigation" after attempting to dig into the secretive operations of the state's multi-jurisdictional drug task forces. When the task forces rejected his Sunshine requests, he refused to concede that these governmental agencies were somehow exempt from the rule of law.

And in a remarkable run of rulings, a number of judges have sided with Malin. In the past year or so, judges determined that three drug task forces — the East Central Missouri Drug Task Force, Kansas City's Multi-Jurisdictional Drug Task Force and the Mid-Missouri Unified Strike Team and Narcotics Group — are indeed subject to the Sunshine law and can be sued for violating it.

In those cases, however, the judgments affirmed only that the agencies must follow the Sunshine law. They did not include fines or attorneys fees — the add-on that gives rulings teeth (and rewards lawyers for taking on such cases). In Cole County, Judge Patricia Joyce ruled that Richardson had intentionally flouted a law he knew very well, and that opens the door to a big payout.

The Cole County lawsuit stems from three Sunshine requests Malin filed in April and October 2015. Among other things, Malin sought records of communication between Richardson's office and the area drug task force.

In response to each of Malin's requests, Richardson answered with virtually the same three-point rejection: The records, the prosecutor wrote, "are not categorized"; to search for them would be "unduly burdensome"; and that "any official records" would be closed anyway.

At the time, Richardson told the Associated Press that if Malin got a court order, then he could get the records.

But that's not how the Sunshine law works, and Richardson could hardly beg ignorance. In Joyce's ruling, the judges notes that the prosecutor is a lawyer and himself a former municipal judge. Indeed, at one time, he even "taught state agency officials how to respond to public records requests."

"A public official commits a purposeful violation of the Sunshine law if they 'forestall production of public records until the requester sues'," Joyce wrote, citing relevant case law. "Here, Richardson refused to search for the requested records despite acknowledging that he retained records that were likely responsive to the requests, and made clear that he had no intention of producing any records without a court order."

Each violation now triggers a fine.

"This is a new level of deterrent," Malin says of the ruling, putting prosecutors and agencies who intentionally reject Sunshine requests on notice that they aren't just risking bad press or legal complaints, but monetary damages.

The ruling "sent a message that these aren't things you can toss aside," he adds.

It's worth remembering, however, just how rarely agencies are held financially accountable. It took the ACLU of Missouri years of litigation before a judge ordered the St. Louis police department to pay $100,000 in legal fees stemming from Sunshine law violations in the World Series ticket-scalping scandal — and that case didn't involve a separate civil penalty like the judgement against Richardson. More recently, in May, a St. Louis Circuit judge found that the St. Louis police department was unlawfully over-charging citizens who requested arrest reports under the Sunshine law, but once again, that ruling didn't come with a civil penalty.

Basically, it's not easy to prove an intentional violation of the law. Just yesterday, a Circuit Court judge ruled that the St. Louis City Board of Election Commissioners owed no penalties for wrongly withholding absentee ballot info during last summer's contentious legal battle between the Hubbard political dynasty and two upstart protesters-turned-politicians.

Malin, though, is confident the wins will keep on coming. His half-dozen lawsuits targeting drug task forces have already tangibly changed how the agencies handle open meetings and respond to records requests.

The next lawsuit scheduled for trial will pit him and his lawyers against the St. Louis County Drug Task Force. A bench trial is scheduled for December 1.