An out-of-control police SUV crashed into a storefront on Cherokee Street early this morning — but the damage proved only minimal.

The officer crashed his vehicle into STL-Style House (3159 Cherokee Street) at the corner of Cherokee Street and Compton Avenue around 1:30 a.m., according to a police spokeswoman. That's just after an officer was shot in the shoulder just a few blocks away while pursuing his personal vehicle, which had been loaned to a family member and then stolen.

Another officer was responding to a call about that incident when he lost control of his vehicle while turning east onto Cherokee from Compton.

"The vehicle struck a fire hydrant and then a building," the department said in an official statement. "The officer sustained minor injuries to his elbow and hand and was conveyed to a hospital where he was listed as stable. The building sustained minor damage and the building inspector was notified. The investigation is ongoing." 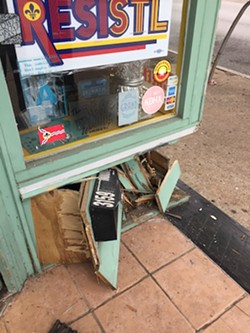 But while the incident drew a large police presence last night, Randy Vines, who co-owns the store with his brother Jeff, said the store was intact and open for business at the usual time this morning.

"We got lucky," he says. "If we had to cherrypick where we wanted the impact, it would be this one."

In fact, Vines says, this morning's crash was the third time the STL-Style House has been so lucky since moving into the neighborhood in 2010. Two previous crashes into the building, including one in February, also yielded surprisingly minimal damage. One of other incidents involved a stolen vehicle smashing into the structure's support beam — but the beam held.

Vines says he was told the officer was pursuing a suspect when he crashed. He speculates that the shop may be particularly vulnerable since it sits right on the corner with Compton.

"In St. Louis, stop signs are optional," he says ruefully.

Editor's note: We updated this post after publication to include new details about what the officer was doing when he crashed, as well as his condition.