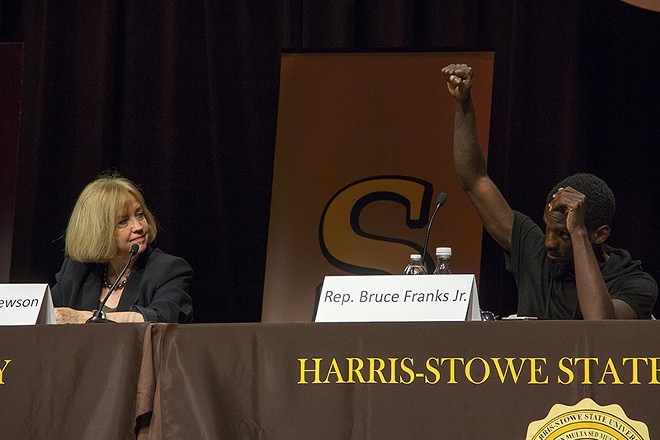 But that message wasn't what many in the audience wanted to hear. Nearly a full month after the acquittal of former police officer Jason Stockley, with protests continuing on an almost nightly basis, the mayor was shouted down, heckled, jeered and roundly booed amid calls for the firing of interim police Chief Lawrence O'Toole.

For the first hour of the event, billed as a forum to discuss "concrete policy actions we can take to promote justice and opportunity for all St. Louisans," Krewson noted that the formal search process for a new police chief was a first in the city's history.

But about an hour into the forum — which included as panelists Ethical Society of Police President Sgt. Heather Taylor and David Dwight from Forward Through Ferguson — the calls of "Fire O'Toole!" were coming so fast that the mayor could barely get a word in edgewise.

O'Toole's leadership of the department has come under fire owing to his officers' response to protests, particularly the controversial "kettling" tactics deployed during mass arrests that have swept up protesters, livestreamers, journalists and bystanders. After arresting 123 in a single night, those officers were recorded chanting, "Whose streets, our streets." O'Toole proudly told the press, "The police owned the night."

Lawsuits are already piling up, and the tactics have drawn condemnation from the ACLU. Krewson herself has asked the U.S Attorney to investigate.

But in her first public speaking appearance since the Stockley verdict dropped on September 15, the mayor faced a crowd that seemed to grow impatient with her string of "commitments," though she did receive her share of applause when she voiced support for creating a new investigative body to handle police-involved shootings and promised to strengthen the city's civilian oversight board with subpoena power.

As the event passed into its second hour, the heckles directed at Krewson became more sustained.

State Representative Bruce Franks, a "frontline" protest organizer who was met with various calls of "Bruce for mayor!" during the event, attempted to cut through the noise.

"Let me break it down," Franks said, turning in his seat to address Krewson directly. He noted that the number of fatal officer-involved shootings were up this year (they are) and pointed out that the department was facing questions about its treatment of black officers. He mentioned O'Toole's rhetoric and handling of the protests — and explained that protesters see dealing with the acting chief as a separate issue from the prolonged search for a permanent replacement.

"We’re not talking about the police chief search," Franks said. "We’re going to pick a new chief, but we still have this interim chief who is detrimental to everything that’s going on."

After the applause for Franks died down, Krewson's response began, "I am not going to discuss a personnel matter." Her non-answer was met with the loudest boos of the night.

Krewson has rid the department of a police chief before. One day after being sworn in as St. Louis mayor, Krewson announced that she'd talked to then-chief Sam Dotson "about the future of the department," a talk that prompted the 23-year veteran of the force to resign. (Dotson is currently vying for a police chief job in Midland, Texas.)

Technically, Krewson doesn't directly possess the power to hire and fire a chief. That responsibility belongs to the director of the Public Safety Department, a position currently held by Charlene Deeken. But since Deeken answers to Krewson, the mayor would still have some latitude to act on O'Toole if she so chose.

During his own remarks, Franks called for the hiring of a public safety director, but the state rep emphasized that it was the city's inaction — particularly the lack of progress in three years since the death of Michael Brown — that keeps the protesters marching.

"The most important actions that are being taken right now are by the folks that are in the streets," Franks said. "We’ve had report after report, and still nothing has been done to transform where we need to be. I think that by hitting the streets and by letting the status quo and everybody else know that we’re not going anywhere, that we’re going to continue to affect the economy, that we’re going to continue to disrupt."

Franks concluded, "So coming to the table right now, really fast, for something that will appease a few people — no, we’re not going for that." 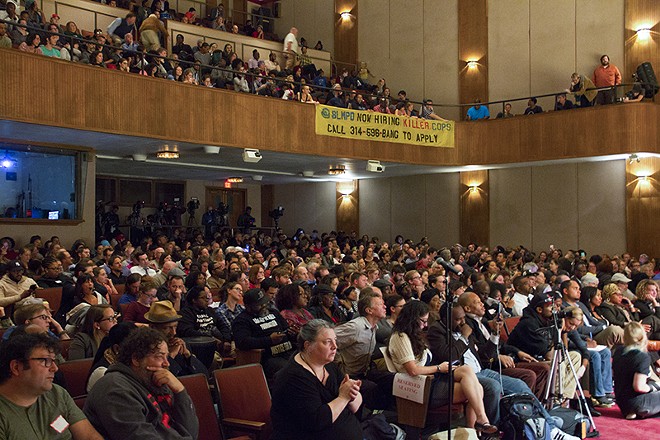