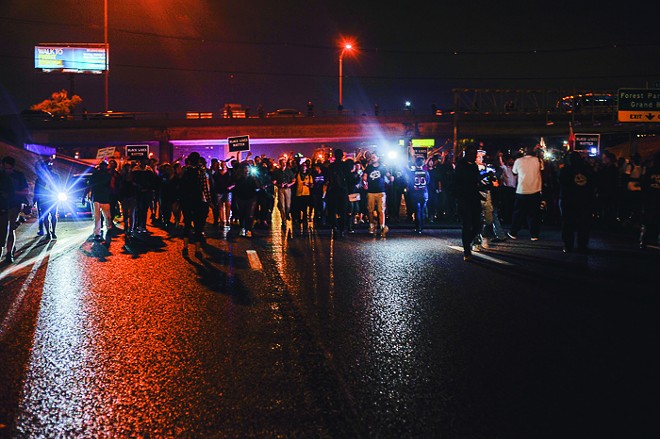 After protesters blocked I-64/40 for more than half an hour, police arrested 143 people, including Franks. "We knew it was a high possibility that we would get arrested," Franks said upon his release Wednesday. "We tried to organize around making it as safe as possible and not get arrested, but we know that's always a possibility. And whenever we talk about going onto the highway, I mean — that risk goes all the way up."

The protesters were charged with "trespassing," a municipal charge.
"Nobody has a First Amendment right to block traffic," Schroer says. "This isn't a protected constitutional right."

Schroer announced Wednesday morning that he plans to introduce legislation in 2018 that will increase the criminal penalty for people who intentionally impede traffic on roadways, highways or interstates without a permit.

"Whether I agree or not, I will protect everybody's constitutional rights all day long," Schroer says. "When you are presenting a clear and present danger in society, that is not a First Amendment protection."

Schroer tells the RFT that he is still looking at what the harsher penalty should be. He says he is considering making it a felony or charging a fine — and that he wants to include mandatory community service hours.

Schroer isn't the only St. Louis-area politician responding to recent events in St. Louis with a legislative proposal. Circuit Attorney Kim Gardner is asking the city for $1.3 million for an independent team to investigate all police shootings in St. Louis. In addition, Alderwoman Megan Green of the city's 15th ward wants clearer protections for protesters' First Amendment rights. "I think that the police response that we have seen to protest — tear gassing people, the macing of people with hands tied behind their back — are all intimidation techniques to keep people from exercising their First Amendment rights," Green says.   Green is sponsoring Board Bill 134 — a bill intended to set clear guidelines for police conduct during protests, repeal an "unlawful assembly" ordinance and protect First Amendment rights. "Basically it sets out clear guidelines," Green says. "Our current unlawful assembly ordinance is vague. It's difficult to infer what it is trying to say at all. We need guidelines that succinctly say 'We are only using things like tear gas if there is an imminent threat.'"