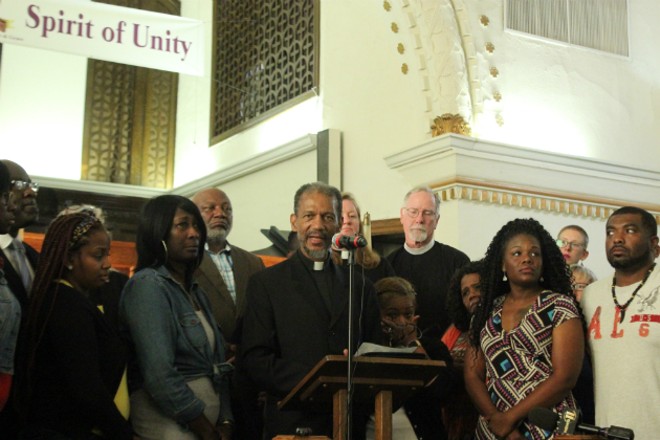 The Rev. Darryl Gray is still wearing the jailhouse ID bracelet from his arrest during Friday night's protest next to Ballpark Village. He plans to keep it on as a reminder.

The tall 63-year-old pastor was following a large group of protesters who had blocked traffic that night around Busch Stadium during a St. Louis Cardinals' game. He and other clergy members have frequently acted at the request of organizers as a buffer between police and protesters, who have held near-daily demonstrations in St. Louis since September 15, when former city police officer Jason Stockley was found not guilty of murdering Anthony Lamar Smith.

The Rev. Erin Counihan of Oak Hill Presbyterian Church in Tower Grove South said that she, Gray and other pastors were again playing the role of buffer on Friday when police turned on them.

The ministers were at the back of the crowd, standing in the intersection of Walnut Street and Broadway, when officers suddenly decided to open the street, she said. Cars began to stream past while people were still in the way, cutting them off from the main group.

"At the back of the protest, when I used my voice to express concern that officers were putting citizens' safety in danger, I was grabbed, and I was shoved by many officers," Counihan told reporters. "When the Rev. Darryl Gray used his voice to express concern that officers were putting my safety in danger, he was swarmed, he was thrown to the ground, he was pepper-sprayed in the face and arrested with another man's knee in his back."
Gray said he was just trying to keep police from roughing up Counihan and another female clergy member. "When I saw them being pushed and shoved, I simply went and asked them the question, 'What are you doing? We've been nonviolent,'" he said. "And I stood between the police and Erin. That was my crime."

Just before he was pepper-sprayed, Gray said, an officer told him, "We're tired of this."

Another protester, 37-year-old Calvin "Cap" Kennedy, was shocked with a taser around the same time. Video from the end of the arrest shows Kennedy and Gray being hauled away by police officers. Gray, dressed in a clergyman's collar, had lost the brimmed hat he usually wears. He said his glasses were also knocked off and an officer smashed them.

Both men were released from jail Saturday afternoon. Kennedy still had a barb from the Taser in his arm. 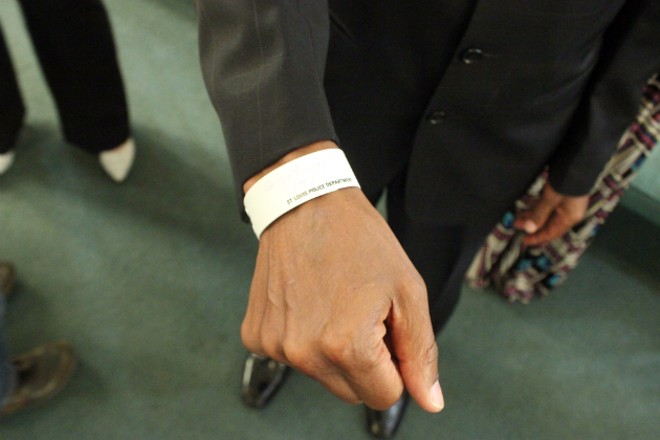 Police have said they gave orders to disperse.

"Officers deploy tactics when criminal activity arises and escalation depends on the level of aggression," police spokeswoman Schron Jackson said in an email. "Pepper spray is a non-lethal tool used when unlawful behavior occurs to protect life and property. One protester was tased as he continued to resist arrest."

Counihan and Gray said they provoked nothing.

Kennedy was charged with resisting arrest and Gray with interfering with an officer, according to police. A third person, 23-year-old Anthony Engle of Wildwood, was charged with assault on a special victim and unlawful use of a weapon after he allegedly chucked a water bottle at police.

Gray said he was told his charges would be taken under advisement and that it wasn't clear if he would be prosecuted.

Nearly two dozen pastors stood alongside Gray today during the news conference in the north city chapel. They criticized the police response to the protests and warned other pastors not to get caught on the "wrong side of history." On the same night Gray was arrested, police also pepper-sprayed Democratic Committeeman Rasheen Aldridge and Heather De Mian, who is a fixture at the protests, livestreaming the action from her wheelchair.

Another pastor, the Rev. Dr. Karla Frye, was previously arrested during a protest at the St. Louis Galleria. A three-frame series of pictures by a St. Louis Post-Dispatch photographer shows her try to intervene when an officer roughly arrested her grandson, only to have officers take her to the ground. A Richmond Heights officer was shown with his hand around her throat. 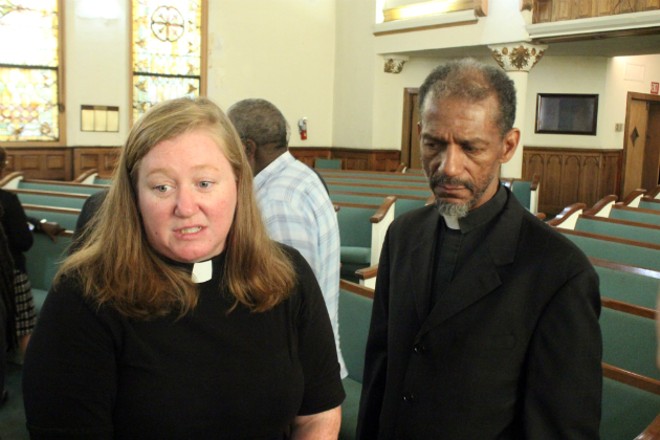 "Who are our children to look to when we see clergy attacked and thrown to the ground like savages?" said Daniel Gould of Missouri Faith Voices, a statewide organization representing multiple faiths. "This is America."

The incident only hardens the resolve of men and women of the cloth to support protesters and join them in the streets, the clergy said.