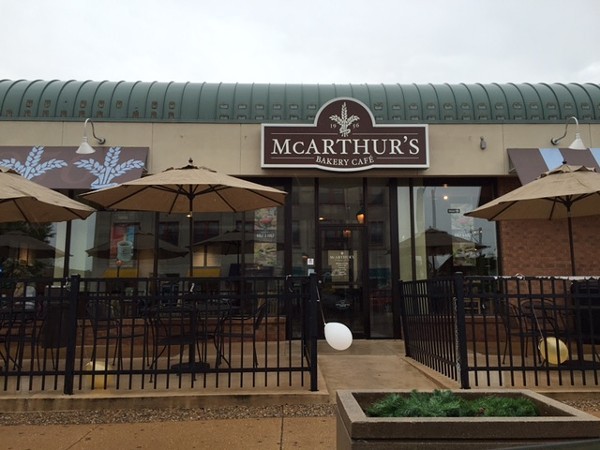 There's once again a bakery-sized hole at the western end of the Delmar Loop.

McArthur's Bakery Cafe announced this weekend on Facebook that it was closing its location at 6630 Delmar, effective October 1. The homegrown chain had moved to fill the 4,800-square-foot spot last spring after Saint Louis Bread Co. pulled out in November 2015.

In its Facebook post, the bakery said that recent protests through the commercial district had absolutely nothing to do with its closure — saying the decision had been made weeks ago and blaming instead the Loop's popularity during evening hours and relative quiet during the day.

"An establishment that is more evening-focused should do quite well in this location," wrote owner Scott Rinabarger.


As a traditional bakery, we rely on most of our sales to come from our custom cake and bakery products, which occur early in the day. Unlike our other locations, the Loop comes to life around the time when we are winding down for the day. This decision has absolutely nothing to do with recent events that have occurred in the Loop in any way whatsoever as I made the decision weeks ago.

The Loop is a vibrant neighborhood with many wonderful people and businesses and has so much to offer St. Louis in the years to come. The community around the Loop is very loyal to local businesses, and an establishment that is more evening-focused should do quite well in this location.

I would like to thank everyone who supported us in the Loop and hope that we will see you at one of our four other locations. The holiday season is quickly approaching, and we are already getting ready to fulfill your family’s baked good traditions.

The news was first reported by the St. Louis Business Journal.

McArthur's still has four locations: two in Chesterfield, one in Kirkwood and one in south county.

Customers of Saint Louis Bread Co. had been devastated when that chain pulled out of the space, which is owned by Commerce Bank, after many years on site. After a petition and other efforts failed to change Bread Co.'s minds, many enthusiastically greeted the alternative that showed up, and had vowed to patronize McArthur's.

But the Loop's western end in particular has struggled in the last year, as business owners wait for the trolley to come online. Major construction for the project wrapped up almost two years ago, but full testing of the line remains incomplete. The trolley is now seeking another $500,000 from St. Louis County before it can begin operations.

In the mean time, a number of vacant storefronts line the commercial district. Recent closures include several restaurants with locations elsewhere, including Chipotle and Noodles & Co., as well as the acclaimed Randolfi's Italian Kitchen and longtime anchor Cicero's.

While chef Mike Randolph has announced a new project for the Randolfi's site, it has yet to open, as does the large beer-focused restaurant Hopcat, which has said it will open later this year at 6317 Delmar Boulevard. Cicero's owners have said they are seeking a buyer.