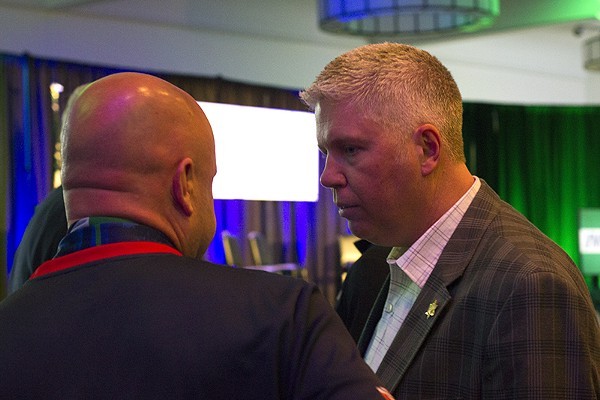 The business manager of the union representing St. Louis police officers announced the news in a Facebook post, describing himself as a "conservative Democrat who is unapologetically pro-life, pro-gun and pro-police." He noted that he has fought to protect unions in the state legislature (he served four terms in Jefferson City) and also believes in increasing the minimum wage to "a sensible rate of $8.50 per hour with annual cost-of-living increases."

Locally, of course, Roorda is more famous as the snowflake who keeps insisting there's a war on cops — and doing everything he can to turn fence-sitters into police skeptics.

The pugnacious former St. Louis police officer has his fingerprints all over recent attacks on local business owners who've criticized the police response to protests in the city in recent weeks (attacks which, full disclosure, have included calling the RFT "a tabloid birdcage liner that hates cops and sides with vandals.")

Although the recent remarks blasting business owners were posted under the union's official account, they're part of a pattern than has sometimes included Roorda's personal social media accounts. Roorda, who lives in Barnhart, Missouri, provided a rare point of agreement in last year's St. Louis mayoral race after blasting the city's treasurer, Tishaura Jones, as a "daughter of a felon," "cop hater" and a "race baiter." Lyda Krewson, who'd previously accepted the endorsement of the police union, called for Roorda's termination and said he would "not be welcome in my office."

Just months before, Roorda had drawn widespread condemnation by tweeting in all caps "this blood is on your hands, Mr. President" after police were gunned down in Dallas.

In addition to losing the city's hearts and minds on behalf of the men in blue, Roorda has lost more than a few races in recent years. He twice lost state senate seats and then lost a Jefferson County council race in 2016.

He also faces a lawsuit alleging he shoved a woman at an aldermanic committee hearing in 2015.

But while we can't claim (even with tongue firmly in cheek) that Roorda would be an excellent public servant, representing Jefferson County in a dignified manner, we still have to wonder if some St. Louis progressives may still feel moved to donate to his campaign. Getting rid of this guy, after all, might be the best chance the city has to come together.