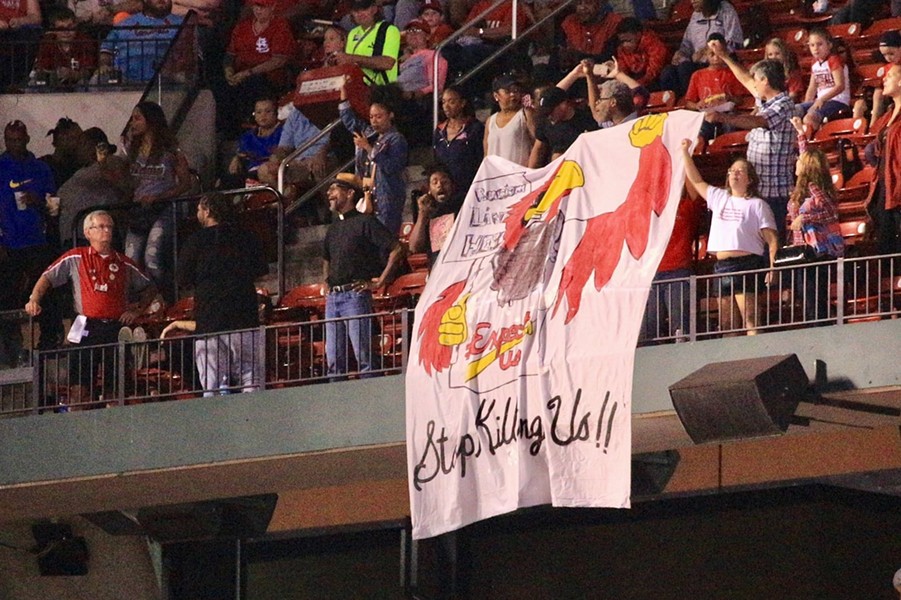 A Friday night protest that began peacefully, with demonstrators dropping a banner inside Busch Stadium reading "Stop Killing Us," changed tone rapidly less than two hours later when police made multiple arrests, appeared to taser at least one protester and pepper-sprayed several others.

The arrests left protesters outraged and confused, and many took to social media to describe a police action that, they say, was unprovoked and excessive.

Among those pepper-sprayed last night was 5th Ward Democratic Committeeman Rasheen Aldridge, who posted a picture to Facebook early this morning showing his face covered in the Maalox-and-water solution used by protesters to treat the chemical agent, which causes an intense and painful irritation to the eyes and skin that can last hours.

Heather De Mian, a livestreamer who has covered protests around St. Louis for years, was also pepper-sprayed in the middle of her stream.

In a video interview uploaded by Post-Dispatch reporter Nassim Benchaabane, De Mian, who uses a wheelchair, said that she'd been attempting to film another arrest when an officer maced her "from the side, out of nowhere."

@MissJupiter1957 a livestreamer in a wheelchair, says she was pepper sprayed while filming after police teased/arrested a man #stlverdict pic.twitter.com/dhjtMdBO4G


Another video appeared to show Reverend Darryl Gray, a frequent presence on the protest line, stumbling to his knees. The video also featured a second protester, Calvin “Cap” Kennedy, being led away after apparently being tased.

It isn't the first to raise questions about police tactics. The ACLU has filed a class-action lawsuit over pepper spray. And earlier this week, in the wake of detailed reports of "kettling" and mass arrests carried out downtown, St. Louis Mayor Lyda Krewson and interim police Chief Lawrence O'Toole called on the U.S. Attorney to investigate claims of police abuse arising from the department's response to protests. (County officers have also come under fire for their arrests of protesters at the St. Louis Galleria last Saturday, which some elected officials have charged were a "police riot.")

The circumstances of last night's arrests are not clear. Police reportedly only confirmed "at least two" arrests.

Before things got bad, a small group of protesters had purchased tickets to last night's ballgame between the Cardinals and Brewers. Arriving around 7:30 p.m., and the group unfurled a banner over a stadium railing and chanted "no justice, no baseball." For the next 30 minutes or so, the protesters continued chanting while walking through the stadium concourse. They complied with orders to leave the stadium around 8 p.m.

Here's a closer look at the banner.

Police have not yet released information about specific arrestees. We will update this post as more details become known.