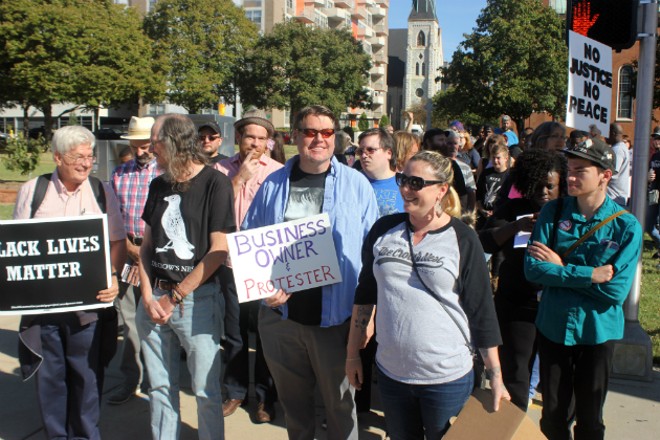 St. Louis Alderman Joe Vaccaro will have to wait if he wants to honor police with a city resolution.

The 23rd Ward Alderman said there were "other sides" to the protests that are now entering a third week following the acquittal of ex-St. Louis cop Jason Stockley. To punctuate his point, Vaccaro held a framed picture of a St. Louis city police officer who was shot in the line of duty as he introduced the resolution.

"There are parents, grandparents, children who worry about their moms and dads," Vaccaro said of the families of police officers.

It was a controversial move, coming just a week after 21st Ward Alderman John Collins-Muhammad introduced a resolution remembering the death of Anthony Lamar Smith, the man killed by Stockley in 2011. The Smith honor angered a large number of rank-and-file officers and their supporters who sided with Stockley.

He ultimately pulled his motion this morning, heeding calls to first submit his resolution to the public safety committee. Outside council chambers later, he confessed he didn't even know the name of the officer in the picture.

Vaccaro said he submitted the resolution as a father of first responders, who worries every time one of his sons is out on a call. 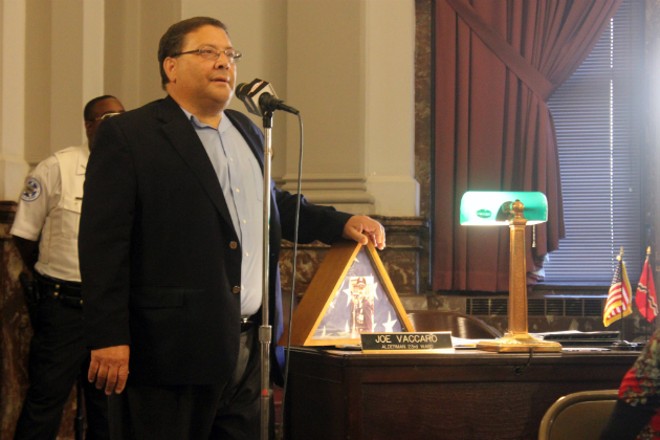 It turns out, the officer in the photo was Sgt. Jeffrey Kawolski, who was shot while chasing robbers in 1987. The veteran cop survived for 21 years, even returning to duty, but eventually died at age 51 of cancer that was linked to his wounds. His widow Kimberly Kawolski sat quietly during the proceedings. Later, she said she advocates for a number of causes —  medical marijuana and teaching meditation to traumatized kids, to name a couple — and she thought Vaccaro's resolution was a gesture worth supporting.

Protesters marched to City Hall and slipped silently into the gallery of the council chambers toward the end of the meeting. Among them were small business owners, who have signed a letter in support of protesters and police reform. Critics of the demonstrations have pointed to the vandalism of several businesses, including multiple broken windows in the Delmar Loop, to paint the largely peaceful protests as violent and out-of-control.

That's a message protesters have tried to push, arguing that the degree of problems caused by vandalism don't compare to police abuse. The business owners have taken some heat for their stance.

When the Riverfront Times published a list of the first businesses to sign — Coriell said the number has grown to more than 140 signatures representing more than 100 businesses — the police union that represents city cops blasted the small shops and restaurants on social media.

After today's board meeting, Coriell and protest organizers held a news conference in the middle of Tucker Boulevard to combat some of accusations. She said they were "pro reform" not anti-police.

The protests are now in their fifteenth day since the verdict. A core group of organizers had previously called for 100 days of disruption said they don't plan to end any time soon, but now say they're prepared to continue long beyond that.

"I want the city to know," Tory Russell said, "we just getting started."