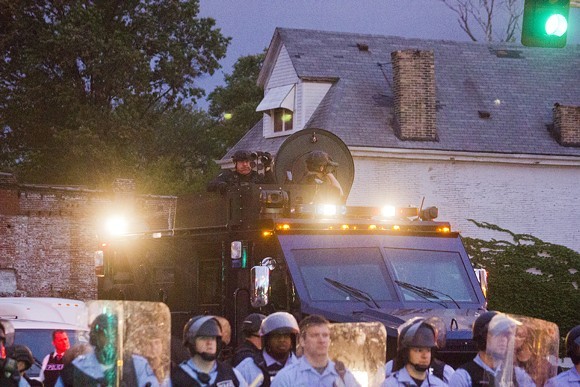 The ACLU has filed another lawsuit against the city of St. Louis for its treatment of protests — but this one predates the unrest that's broken out in the city in the last two weeks.

The eighteen-year-old was shot by police on August 19, 2015, after he ran from a house where officers were delivering a search warrant. Officers say they fired at the teen because they feared for their safety.

But as neighbors and other protesters gathered in the late afternoon, police in riot gear showed up — and the ACLU alleges that a peaceful protest devolved when cops gave a "muffled dispersal order." Les than two minutes later, the suit alleges, they advanced on protesters, firing tear gas and smoke grenades at them. A SWAT truck followed the protesters down a residential street, shooting tear gas canisters.

Two of the plaintiffs in the suit, Sarah Molina and Christina Vogel, say they were hit with tear gas. The third, Peter Groce, alleges that police shot a tear gas canister and pepper spray directly at him after he told officers they should get their SWAT vehicle off the grass and onto a street.

“This lawsuit reveals a consistent pattern of St. Louis Metropolitan Police Department officers repeatedly ignoring the First Amendment rights of the people they took an oath to protect and serve,” said Tony Rothert, legal director of the ACLU of Missouri, in a prepared statement. “Officers should never retaliate against people for nonviolently assembling or publicly grieving the loss of a member of the community.”

"What we saw over the weekend – mass arrests and gassing of entire neighborhoods – didn't occur in a vacuum. Enough is enough,” Molina said in a statement. “We need to push back and say 'this is not okay.' We need to push back against police interference with our Constitutional rights.”

The ACLU has also filed a lawsuit over police pepper-spraying protesters downtown on September 15, the first day of protests that followed the acquittal of former St. Louis police officer Jason Stockley. Private citizens have also begun to file lawsuits over the department's response to the protest, including a Kansas City documentary filmmaker who says police beat him to the point of unconsciousness, and that he woke to them pepper-spraying him.